STATELINE – Few entertainers are better live than recorded. Diana Krall is one of those musicians.

Though her voice ranges from purring sex kitten to raspy lounge singer, it’s her fingers that are most magical. The way they glide across those ivory keys — lingering, pounding, subtle, but always with such purpose. Oh, the music she creates – at times getting off the bench to put more oomph into the keys.

Jazz really is about the music, with the lyrics secondary. 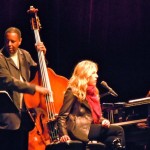 Diana Krall is all bundled up to ward off the night chill at Harveys on June 18, as Robert Hurst plays the bass. Photos/Kathryn Reed

It’s that free flowing jam session of sorts that makes for songs not always sounding the same each time they are played. They often seamlessly flow into one another without a clear ending or beginning.

Krall returned to Lake Tahoe on June 18 after a four-year break from being part of the Harveys Outdoor Concert Series.

Accompanied by Anthony Wilson, who on guitar seemed like a cross between Leo Kottke and Eric Clapton; Kareem Riggins on drums; and Robert Hurst on bass, the quartet made for a formidable ensemble.

The most disappointing part was they only played for a little more than hour. A close second was having the carnival at Horizon as a backdrop for the audience. Besides the horrible visual, the noise from it was equally as irritating as the people in the row behind us talking loudly through most of the concert.

The 43-year-old Krall interacted a bit more with the audience compared to 2007.

“The amusement park screams remind me of my husband,” Krall said of husband Elvis Costello.

Krall and Costello have been inspired by a variety of musicians, but both have a fondness for the 83-year-old Mose Allison. They have recorded his songs, with Krall singing “Stop this World” on Friday night. It is on her “The Girl in the Other Room” album from 2004.

And it was the Mose Allison Trio that opened for Krall.

“He really is one of my heroes,” Krall said of Allison.

While many could be overheard asking who Allison was, one woman in the eighth row said, “I’ve been waiting to see him since the 1970s.”

The trio started with a classic syncopated jazz beat. This is what makes jazz so hard to do well – it’s off beat.

His lyrics are quirky, like, “Your mind is on vacation and your mouth is working overtime.”

Allison says his prime inspiration in high school was Nat Cole. Cole is also a big part of Krall’s music. She put out an album in 1996 dedicated to the Nat King Cole Trio.

At Harveys she performed a song inspired by Cole, as well one of his originals.

As the sun turned a brilliant orange on this chilly night, the Allison trio wrapped up a nearly 40-minute performance to mixed appreciation from the audience.

After all, it was Krall they came to see. While the parking lot of a casino is not the ideal place to listen to any jazz artist, especially one of Krall’s caliber, it works. Though I still think the South Shore Room would be a better venue for her.

On this mid-June night it was downright cold. Krall at times sat on her hands to warm her fingers. Dressed in black leather jacket and red scarf, her blonde hair blew in the gentle breeze.

For some of her more somber songs like “Abandoned Masquerade”, the carnival behind her was an unfortunate juxtaposition, not to mention at times it drowned out Krall’s vocals.

But, still, she held her own. She is clearly getting better with age.

And ideally as the concert series progresses, there won’t be any more carnivals or cold nights.

Making a night of it

Staying at the hotel made for a quick getaway to a warm environment. Many others had the same idea as hundreds flowed inside to Harveys after the show.

We had arrived in the late afternoon to make it more than a crash pad. Lounging by the pool finally made it seem like summer had arrived.

Kids running by, telling mom they wanted to go to Sno-Flake made me wonder if these were other locals or tourists who had discovered the best place on the South Shore for French fries.

Having been on the convention center floor plenty of times before, I didn’t know the pool and fitness center were there as well. A bar is poolside. I would have fired the bartender if he were my employee. A guest (not one of us – we just overheard it) asked him how he was doing, “I’m bored,” he said. Not good. And he had no creative ideas for a fun summer drink, so we stuck with beer.

But it was a great place to relax in the comfy lounge chairs. The pool is warm, but we opted to be warmer by going in the hot tub.

We had dinner reservations in Round Hill at Capisce? – the first, and last, time I need to eat there. What is it with lousy service on the South Shore? The wine was poured so it chugged out of the bottle and splashed on the tablecloth, our glasses were never filled up, the olive oil-balsamic vinegar mixture was placed by me so Sue couldn’t reach it, and the used forks from our salad (with mine tasting like a vat of vinaigrette was dumped on it) being put on the tablecloth instead of being given new ones.

I expect more out of all restaurants.

Sue liked her ravioli. My veggie pasta dish was OK.

Back at Harveys, being on the 11th floor meant having a great view of the lake from bed. Waking up to the sun hitting Mount Tallac was stunning. So much snow; it looks like the cross may last until next winter.

As the morning wears on, the clouds dissipate and a bluebird day takes hold.

Boats of all sizes slide across Lake Tahoe. It is mesmerizing to watch.

Out the window to the left below us is the pool. It’s morning and a few guys are catching rays. Raising my eye the Heavenly Village and the mountain beyond  it are visible – still with lots of snow.

While the concrete and rebar from the stalled convention center project are obviously in view, the natural scenery from this vantage point distract me so I don’t notice the hole.

It’s check out time and my stomach is gurgling. It’s also Father’s Day. We head to the original Red Hut – my Dad’s favorite breakfast place. He insisted going there every time he and Mom visited. We toast with coffee – wishing he were there. He died in April 2010.

The nearly 24-hour getaway ends on a great note. The Red Hut’s service is impeccable (and is never anything less) and the food delicious.

July 20 – Soundgarden with The Mars Volta

Susan Wood contributed to this story.

Previous post : Snippets about Lake Tahoe Next_post : Meyers next up for controlled burn by USFS