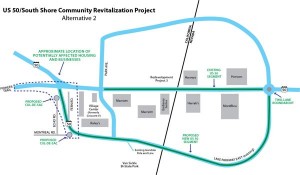 Alternative 2 of the loop road proposed by the Tahoe Transportation District.

STATELINE – One thing rang loud and clear Wednesday – Tahoe Transportation District and South Lake Tahoe officials are not on the same page when it comes to the proposed loop road on the east side of the city.

Carl Hasty, leader of the TTD, was the guest speaker Jan. 30 at the Soroptimist International South Lake Tahoe meeting at Harveys.

City Councilwoman JoAnn Conner was a guest of the Soroptimist. She was sitting next to newly appointed, though not yet sworn-in, Councilwoman Brooke Laine.

Hasty spoke about Alternative 2, the original route his agency brought forward and how the city doesn’t like it. But it is still on the table. 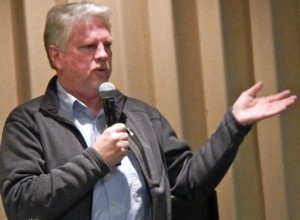 The TTD is an independent agency and does not take its direction from the city. The city has one vote on the TTD board. That member is Councilwoman Angela Swanson.

TTD can go forward with the loop road no matter how much the council protests. If properties would need to be obtained by “force”, either the city or Caltrans would need to implement eminent domain. The city says it won’t do so. Alternative 2 would affect more than 80 properties – some residential, some commercial.

Then Hasty spoke about the triangle alternative.

“The city says they would like this in the environmental documents,” Hasty said.

Conner looked quizzical, and shared with tablemates that that alternative has not been before the council.

During the question and answer period she told Hasty she had no idea what he was talking about when it came to Alternative 3.

Hasty said he plans to be back in front of the council in February or March to discuss the loop road.

The idea is Highway 50 would be rerouted behind the casinos, with most proposals going only behind Harrah’s and MontBleu. The current highway by Heavenly Village and in front of the Stateline casinos would be narrowed and become a city street.

Hasty called the loop road an opportunity and that those in the room should see it that was as well.

Making the area more pedestrian and bike friendly are goals, as is the ability to close down the road and have events on the city street.

But what is never discussed is why today events don’t occur on the current loop road – behind any of the Stateline casinos.

After the council gets an update, the TTD board will hear a presentation, the results of the economic analysis should be out in the spring, then alternatives will be refined.

“We are not at the detail level yet,” Hasty said. That will come with design charettes as well as when the city and Douglas County work on their respective area plans.

The goal is for the loop road to go through the environmental process in 2014, funding would be sought in 2015, with construction to follow when money is in hand.