Officials with the American Century Championship golf tournament are saying it’s too soon to know if Livestrong will remain the official charity.

The annual celebrity golf tournament at Edgewood Tahoe in Stateline has been affiliated with Livestrong the last seven years. 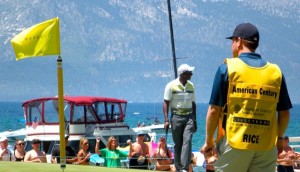 Livestrong has a strong presence at the annual Lake Tahoe celebrity golf tournament — including on the flag and caddie. Photo/LTN file

While Lance Armstrong has been accused of wrongdoing, the foundation he created in 1996 after surviving testicular cancer is not under scrutiny.

Armstrong played in the Lake Tahoe golf tournament in 2006. The gallery following him rivaled Michael Jordan’s.

“Plans have yet to be determined regarding tournament beneficiaries,” Phil Weidinger, who runs the public relations arm of the tournament, told Lake Tahoe News. “As in previous years, an official announcement will be made by American Century Investments in spring.”

Through Livestrong local charities have shared in a pot of cash that some years totaled more than $100,000.

Livestrong has been printed on the back of caddies’ vest, on the sail of the investment firm’s boat anchored near the 18th hole, on leader boards, as well as there being a tent just for the organization. It has become an integral part of the annual South Shore event.

Tonight the disgraced cyclist’s confession to Oprah Winfrey of using performance-enhancing drugs during his career will play out on television sets around the world.

On Oct. 17 Armstrong resigned as chairman of the board of Livestrong and on Nov. 4 he left the board. He has been banned from cycling for life and stripped of his seven Tour de France titles.