STATELINE – While China was the No. 1 fossil fuel emitting country in 2011, what is missing from most conversations is who is consuming all the goods that country is producing.

A significant amount of CO2 emissions comes from making things. And it is people in the United States who are buying those things made in China.

This was one of the points driven home Thursday by Chris Field – that consumers have a role to play and must be held accountable, just as the polluter does and should be.

Field was the keynote speaker Jan. 10 at the Operation Sierra Storm Meteorologist Conference in Stateline. The four-day conference ends Saturday.

The scientist was part of the team that won the 2007 Nobel Prize and lead author of the study on the effects of global climate change. 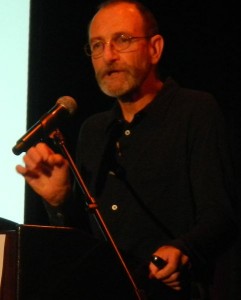 Field explained how it was thought when the 1997 Kyoto Protocols were adopted that developing nations had a long ways to go to catch the industrialized nations when it came to emissions. That theory was proved wrong.

But that is not the whole story.

“Per capita, China’s emissions are one-quarter what they are per capita compared to the United States,” Field told the group gathered at Harveys casino.

Based on data from the Mauna Loa Observatory he said there is proof atmospheric CO2 has increased 40 percent since the 1950s.

Beyond that, ice cores extracted from Antarctica can show scientists what was going on thousands of years ago.

To simulate how small amounts of particles can change the composition of the atmosphere, Field took two 1-liter bottles of water. Into one he inserted drops of red dye to represent the amount of CO2 released in the atmosphere during the Industrial Age.

Then he shined a red light and green light through the now pink water. The red went through, the green did not. The experiment was to show selective absorption – which is what happens in the atmosphere.

And while it has been proved fossil fuels are altering the atmosphere, which in turn changes climate, Field readily admits, “Mostly we live in a fossil fuel powered world.”

For Lake Tahoe, a diminishing snowpack and greater threat of wildfire are two of the key factors as climate change continues to take hold.

“Snowpack is vital to the economy and ecosystem. There is a clear trend of warming in mountain ranges. Snow melts earlier each spring,” Field said.

He said some models show the snowpack in the Sierra diminishing by 50 percent by the end of the century, while other models say it will be 90 percent.

This in turn will lead to greater wildfires because the brush will be so much drier. The threat is already there because the time between snowmelt and first storms is getting longer.

Another consequence of less snowpack is less water reaching the agricultural heartland of California. Farmers in the Central Valley grow crops with irrigated water – from reservoirs that have been filled from Sierra snow.

Field said it is going to take technology, leadership and cultural change to alter the course the world is on when it comes to climate change.