Now in its 10th year, the Harveys Outdoor Concert Series is set to deliver its most eclectic lineup to date.

Sultry jazz songstress Diana Krall opens the Stateline music season June 18. Rocker Sammy Hagar brings it to a close Sept. 10. A little bit of every other genre will fill out the other shows.

Better sound systems and raising the bleachers are two of the more significant changes through the years. Considering the venue is a parking lot – not a lot can be done. 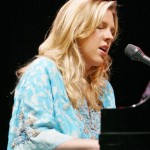 But considering the floor is asphalt, it’s also surprising how good the acoustics are. One would think the South Shore Room might be better for an artist like Krall. But when she played the Outdoor Series in 2007 her voice, her music – well, it was hard to know you weren’t in a nightclub.

Although she has a voice that can carry through the mountains with ease, her lyrics are more of a sensual nature that lends one to think a more private venue would be appealing. After all, Krall says of her 12th album, “It’s not coy. It’s not ‘peel me a grape,’ little girl stuff. I feel this album’s very womanly – like you’re lying next to your lover in bed whispering this in their ear.”

Using line array sound systems allows the music to be focused on the arena instead of filtering outside the venue.

“The sound systems have improved over the years so they are a lot more directional,” explained John Packer, who is in charge of entertainment for Harveys and Harrah’s Lake Tahoe. “We used to get some complaints.”

For the past three years the casino property has paid for studies to be done to appease the Tahoe Regional Planning Agency and its noise regulations.

Although the music is not filtering out as far as it did when the concerts started in 2002, the Horizon parking lot remains a tailgating party for those who don’t want to pay to see a music act. They just aren’t right on the wall anymore. Horizon staff moved them back out of the fire lane.

People also can be seen lining the loop road and along Stateline Avenue.

Part of the issue is people can’t afford to see every concert. For two years now prices are down a bit, though. The exception was last year when the top ticket for Elton John was $235.

“The venue does not set the ticket price. It’s based on a guarantee, the capacity, and other revenue sources like merchandise and beverages,” Packer said.

More artists are making their money off touring than album sales based on how music is purchased. But they are also not going to as many cities as before.

Last summer there were venues that were half full because people didn’t have the cash to fork over for a concert.

“Live Nation, one of the biggest promoters, canceled 250 shows last summer,” Packer said. “Ours was one of the most successful venues for its size.”

The outdoor venue seats about 7,500 and can grow to about 9,300 for a general admission show – like what Phish will be for its two August performances.

Phish fans are clearly an example of people who are willing to spend money. The two Tahoe shows sold-out in less than an hour.

“I was told not to be surprised by it. They are phenomenal,” Packer said. “They are all outstanding musicians and have created quite a following.”

Not only are the shows sold-out, but both are in the middle of the week – a bonus for lodging properties that often have plenty of vacancies midweek even in the summer.

“Before we had it even booked for sure, they were calling to get reservations to get hotel rooms,” Packer said. He heard MontBleu was sold-out before his property had the contract signed. And he said hotels on the North Shore are booked too because of this show.

“A lot of them have never been to Tahoe before. I think that is a good thing that we will be introducing a lot of new visitors to Lake Tahoe for the first time,” Packer said of Phish fans.

Soundgarden is one of those groups doing a limited number of concerts this summer. They picked Tahoe over Sacramento.

This is the first time for Soundgarden to play in Lake Tahoe. The Mars Volta is opening – and they are often a headliner, having sold-out the Greek Theater in Berkeley before.

Alison Krauss and Union Station will be the second concert of the summer. Krauss has been here before.

Next is Lionel Ritchie, who was a regular at Harrah’s South Shore Rom in the 1970s and ’80s after he left the Commodores.

“He has at least 20 hits if not more. He’s real upbeat and personable on stage,” Packer said.

“It’s reggae, but Southern California beach reggae,” Packer said of Slightly Stoopid. “Some of them look like surfers.”

Like Phish, he expects this to be a different crowd than the typical baby boomer who so many of the past concert series catered to.

Lady Antebellum is nearly sold-out. This mega award-winning trio is credited with Tim McGraw selling out last year when they opened the concert series. Even though Lady Antebellum had a slew of awards to their credit by then, they were the opening act a year ago.

Packer is thankful the concert series started a little later this year. Memorial Day weekend started things off in 2010. This year Memorial Day would have been more like a Christmas concert based on the all the white stuff that fell.

Steve Miller Band wraps up July. Opening is Dave Mason, who will be back in the fall at the South Shore Room on his own.

Each year the concert series has an Asian group play, but it’s not always well advertised to the general public. The Big Four is different. The foursome from China is expected to sell a lot of tickets.

Miranda Lambert, also a former opening act at Harveys, is the headliner Aug. 19.

“Country shows are always entertaining. They have more going on, great graphics,” Packer said. “They have a production. I’ll expect no less from Miranda Lambert.”

Wrapping things up for the summer is Sammy Hagar, who is a regular in Tahoe. He’s never had a real opening act in the past; sometimes he’s brought friends on stage, last year his son opened. This year, though, a well-known group is likely to be added to the ticket.

For more information about the concerts, go online.