People are coming to Lake Tahoe and they are spending money. And projections for 2013 are that more of the same is going to happen.

“We are going to have our best year sales-wise. It’s a combination of people staying closer to home and fabulous weather,” Tom Turner, owner of the 14-year-old Riva Grill in South Lake Tahoe, said.

Turner told Lake Tahoe News that Caliente in Kings Beach and Gar Woods in Carnelian Bay are also having a spectacular year revenue-wise. Bar of America in Truckee was added to his restaurant portfolio in April.

Ski resort officials had plenty to be thankful for during the long Thanksgiving weekend. People flocked to the resorts to enjoy the mix of natural and man-made snow. 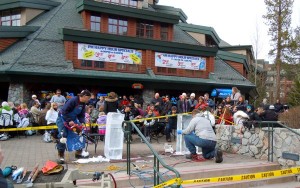 Indications are people want to travel again and Lake Tahoe is one place they want to visit. Photo/LTN file

“We had a remarkable Thanksgiving – Thursday through Sunday,” Andy Wirth, CEO of Squaw Valley and Alpine Meadows, told Lake Tahoe News. “Skier visits and traffic were near an all-time high (at Squaw) largely because we opened a great deal of terrain on the upper mountain.”

The U.S. Commerce Department reports that numbers to date show the travel and tourism industry is likely going to set another record in 2012 in terms of trips and revenue.

Lakeside Inn in Stateline doesn’t spend money marketing its hotel and still it has numbers that prove there is demand to come to Tahoe. Compared to 2011 at this time Lakeside has 2,000 more reservations lined up.

“Given the volume on the books for next year we are doing better than the last three years,” Stacy Noyes with Lakeside told Lake Tahoe News.

She said the bookings started before summer and before the ski resorts opened.

Smith Travel Research said U.S. hotels posted a record 8.3 percent increase in room revenue for the third quarter compared to 2011. Occupancy rose 2.7 percentage points to 69 percent, while room rates rose 5.6 percent to an average of $91.08 a night. Revpar, which is the combination of room rates and occupancy, is up 8.3 percent to $62.83.

When the Lake Tahoe Visitors Authority was putting together its 2012-13 budget, which took effect July 1, the staff and board did so with the assumption hotel occupancy would be on a gradual incline. Most of LTVA’s money comes from hotel taxes collected at the lake on the Nevada side. But a substantial chunk of change also comes from California hoteliers via the Tourism Improvement District.

“Our budget this year is built on the assumption that the world is a brighter, happier place that involves more travel,” Carol Chaplin, LTVA executive director, said. But the numbers, she said, are conservative.

Still, this year’s budget is $1 million more than it was in 2008. Much of that has to with Douglas County increasing the lodging license fee and the TID upping its contribution.

The uptick has also allowed the LTVA to incrementally add staff to bring the number of workers back to what it was a few years ago. Tony Lyle came on board this fall as director of tourism.

“He is big into social media and he is tech savvy,” Chaplin told Lake Tahoe News. “We really thought the position added a new dimension that will help all of us do a better job at what we do and maybe do new things as well.”

Lyle will be tasked with providing the agency with analysis and a plan for connecting with visitors when they are in town and before they reach the South Shore. This includes at the visitors centers, via the phone, email and through social media.

LTVA knows it needs to be where the traveler is – which is on a mobile device and often on social media.

(Marketing chief Andy Chapman at the North Lake Tahoe Resort Association did not respond to an email inquiry, so what the North Shore is doing is unknown.)

“We’re going to see mobile this year represent 35 percent of all searches. Next year, it will be about 45 percent,” Tran Hang, head of Google’s travel industry, told Hotel News Now. “These are outstanding growth rates we can’t ignore.”

On the flip side is Travis Katz, CEO of Gogobot – a travel-related social network. He cautions that people easily get information overload and that they want to be treated as though their vacation is special and unique.

His statements in Hotel News Now give credence to the trend that travel agents are seeing resurgence in business because people want that authentic, specialized trip. But that’s not to say agents aren’t using Google and the like for their customers.

Chaplin said with current staffing there is a greater likelihood the LTVA will attend more events that are designed to reach would-be vacationers – especially those outside the country.

After all, the U.S. Department of Commerce says international visitors this year could infuse $169 billion into the economy.

Below are some stats about Lake Tahoe travel: