STATELINE – Barren open space at dawn became a bevy of activity by noon and when the lights went out Tuesday night the room embodied the essence of the holidays.

Barton Health Foundation’s 4th annual Festival of Trees and Lights begins this week. All the trees and other decorations went up Nov. 27.

Judges will be roaming the MontBleu convention center this morning to pick the best of the 12 large, designer trees, along with best school tree, and best Barton wreath and trees. During the festival the public will be able to weigh in by casting a vote in the “people’s choice” award. At the Dec. 1 gala the bidding begins for those who want to take a tree and trimmings home. 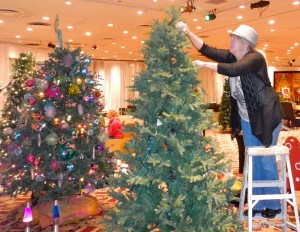 Laurie Brazil strings lights on one of the designer trees. Photos/Kathryn Reed

Having won “best in show” the last two years, Terri Tepper is hoping to make it three consecutive years with her Advent-urous Arch. Instead of a traditional tree she has created an arch out of the faux greenery and added a hanging Advent with table and chairs below it. Each of the candles represents faith, hope, joy and peace.

“I like to think outside the box. I’m not crazy about artificial trees,” Tepper, who owns Flowers by Terri, said as she was setting up her station Tuesday afternoon.

Though the Barton Foundation festival is not religious, Tepper turns to prayer to find her inspiration each year. She wanted to represent a deeper meaning of Christmas with her creation. But, she added, she didn’t want it to be “in your face”. “People who don’t know the Advent will think it’s a hanging candelabra,” Tepper said.

It’s up to the designers how they want to transform their trees. Up early were the Gingerbread Man and Snowsports trees.

Working on her inaugural tree was Rebecca Wass. She took time off from her job to be able to transform the somewhat pliable branches into Santa’s Workshop.

“I want it to be an attention grabber for kids. I believe Christmas is for the kids,” Wass said.

Whimsical and fun is how she described her tree.

Besides looking at all the brightly decorated trees, there is the Teddy Bear Hospital to visit, letters to Santa to be written, crafts to create, gift buying at Mrs. Claus’ Shop, and photos with Santa. Plus, there is entertainment most days.

The first three years of the festival the proceeds went to Barton Health’s Community Clinic expansion and renovation. This year the money will be used to turn Barton into a level 3-trauma center.  The cost of staff training, equipment and remodel of the emergency room is more than $200,000.

Paul Fry will be honored Dec. 1 with the spirit of philanthropy award.