A first-of-its-kind study examining behavior and protocol surrounding a major wildland blaze features Lake Tahoe’s most significant — the Angora Fire of 2007, which consumed 254 homes, forced the evacuation of more than 3,000 residents and caused about $160 million in damage over nine days starting June 24.

As the five-year anniversary approaches, South Shore residents will be asked in a 30-minute phone survey their views of how well the community responded to and coped with the disaster. This is for the University of Colorado study that is funded by the National Science Foundation. The research also examines the Lake Arrowhead area, which endured its own large fire disaster in 2007. Both regions are considered rural, remote and tourism-based economies.

“What we were looking for were two rural communities that had a significant event and comparable character,” study analyst Jeannette Sutton, who works in the Colorado Springs-based university’s Trauma, Health and Hazards Center, told Lake Tahoe News.

Sutton spearheaded the research, which last year wrapped up its participant questionnaire of which this reporter took part in. The Q&A brought the study group to South Lake Tahoe where selected participants within categories from public safety and mental health to media and leadership were asked about the effectiveness of fire prevention efforts before the major blaze and how well the town recovered. The research also evaluated a predominant theme: whether information dissemination was adequate enough.

“Information online was a really big question,” Sutton told Lake Tahoe News in a recent phone interview. “Then, we had to look at how people could get information if they can’t access the Internet.”

While the Angora Fire peaked that Sunday, the research discovered citizens failed to get emergency broadcast updates, and no local radio stations covered the disaster. In addition, perceptions were expressed by people in the two study areas who believed print newspapers “lacked significant online presence, real time information” and concentrated more on “human interest stories”.

At the time of the Lake Tahoe disaster, the Sierra Nevada Media Group of which the Tahoe Daily Tribune is a part of tried to keep up online with pertinent, real-time updates but split its time on its print versions. (Lake Tahoe News did not exist in 2007.) There were times when citizens voiced concerns of feeling lost. At the outset, even initial phone calls channeled to the California Highway Patrol Truckee dispatch center within minutes of seeing the huge plume of smoke were met with pessimism over whether the wildfire sparked by an illegal campfire near Seneca Pond along the North Upper Truckee Road was actually a control burn.

Since then, local leaders and public safety officials have agreed systems need to be put into place to prevent the lack of real-time information from not reaching citizens from happening again. At least South Lake Tahoe city police dispatch was on top of the catastrophe with all hands on deck and longtime dispatch supervisor Leona Allen demonstrating grace under pressure while her home burned. 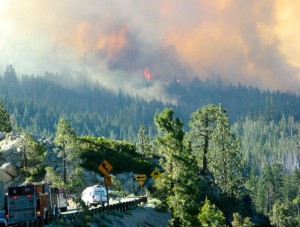 A university study is looking into various aspects of Angora, including response time. Photos/Lake Valley Fire

Stories abound of how citizens and their leaders coped with the stress and angst of such a disaster, and the study served to examine that.

As the city put up a command center at Lake Tahoe Airport in council chambers, an evacuation center was set up at the city Parks and Recreation building. Within days, town hall meetings were scheduled at the South Tahoe Middle School. Lake Tahoe Community College posted a list of houses that had burned, partially or completely. LTCC also collaborated with the American Red Cross on recovery efforts. A communitywide fund to aid in the recovery was established, and fundraisers with donation centers were organized for those in need.

Help was there, but this was no easy time for the community.

“We were looking at different themes in both areas and will survey the two communities to see the contrasting of how the community adapted,” said Jessica Lambert, who created the study as part of her post-doctoral work at the Colorado university.

Another theme presented itself in the research. For both lake areas, factors influenced the magnitude of the fires. Lake Arrowhead had a massive bark beetle infestation in 2007. The South Lake Tahoe area endured “restrictive environmental policies aimed at protecting natural resources,” the study’s summary concluded.

For that, a bistate Blue Ribbon Commission was formed to evaluate such policies with then Republican Govs. Arnold Schwarzenegger of California and Jim Gibbons of Nevada overseeing the effort.

Years later, the U.S. Forest Service has worked with local fire agencies and councils to conduct fuel reduction projects. Shortly after the Angora Fire started, “slash piles” – the buildup of brush and ladder fuels to be set in control burns — became the enemy of the community vernacular as citizens complained they contributed to increasing the wildland blaze. 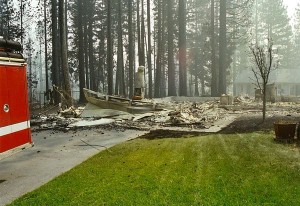 Residents of Lake Tahoe will be part of a study about wildfires.

Resilience stood out in the research as the psychology of dealing with a disaster also concluded the two communities’ citizenry accepts catastrophe as part of its life for “hearty mountain folk” who “choose to live remotely, while connected to the land, trees and mountains.” Those interviewed painted a picture of resiliency; as even “strong fluctuations in (a) tourism economy requires a resolve to remain (here) during difficult periods.”

When the study is complete, which will be after the citizen surveys are taken, the document is intended to serve as a model for other fire-prone communities of how to prevent a wildfire, but also how to respond when it does happen.

According to Lambert, “The goal is to learn more about factors that contribute to resilience in rural communities that face disasters. I think the hope is that findings could be used to inform policy.”