I will never be able to get out of my mind the sights and smells of the Angora Fire. I was at ground zero on the morning of June 25, 2007. I never want anyone to experience that again – the loss of their mementos, personal belongings and their beloved pets. All things lost during the fire that can never be replaced.

In my opinion, South Lake Tahoe forever changed at 2:15pm, June 24, 2007. I was mayor at the time of what would be later known as the Angora Fire. The events over the course of the next week following the fire were the most difficult times for our community. Others will recount the details of the cause and circumstances of the fire.

For me, the most vivid details started shortly after the fire started. From my house I had a clear view of the initial plume. I knew it was trouble just by the heat, wind, and a very dry previous winter. I snapped a few pictures from my Blackberry and sent them to the city manager who was working that Sunday at the airport. We spoke briefly and he said that this was a significant event. According to the city’s fire chief, the fire at that time was within the jurisdiction of the county but on track to move toward the city. Details were sketchy, but the conditions and location of the fire caused great concern. The city manager and I decided it was imperative to open the Emergency Operations Center (EOC) located at the airport in the City Council chambers just in case the fire escalated.

I left my home for the EOC never imagining how aggressive the fire had become or was about to be. We (the city manager, police chief, city clerk, city attorney, and a few senior staff members and myself) were briefed. The fire wind gusts were up to 50 miles per hour and the fire area was heavily timbered with a dense canopy in the path of hundreds of homes. People were being evacuated. Federal, state, and local fire agencies responded on the initial attack and it quickly became evident that home protection and evacuations were the priorities.

The appropriate staff and other local agencies were notified the EOC was being opened. It seemed like within minutes the room was full. There wasn’t a lot of talking at first, everyone was setting up tables, computers, and phones lines were being drug across the floor. The city’s information technology staff was laying additional lines and setting up fax machines and televisions. Different public safety agencies were flowing in. Staff was soon making arrangements at the Parks and Recreation Center for evacuees. The pre-existing disaster recovery plan was in full swing.

Everyone was very professional and operated in a unified environment. The mission we were tasked with was to gather information as it was coming in and disseminate out to the public as quickly as we could. It was very fluid. I called the El Dorado County sheriff and undersheriff to tell them how serious this fire was and how quickly it was spreading. The sheriff immediately dispatched this county EOC staff. The fire chiefs and U.S. Forest Service had immediately made all the necessary requests for other additional assistance. 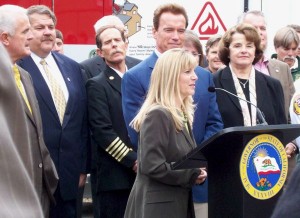 There was an almost immediate intense media presence and their numbers were growing at a rapid rate. The media overwhelmed us. The city had no public information officer, so the city manager and I were the point of contact. The city clerk and the city attorney would gather updated information from our briefing and the city clerk would provide to us, almost every 10 minutes, with updates so we could inform the media and public as rapidly as possible. Every time we got an update we were relieved there were no reported human casualties, but the number of lost homes was unclear. Lives of residents and first responders were constantly a worry.

In the meantime, my son called me while I was at the EOC. He told me he and his wife were evacuating. I told them just go to my house with whatever they could take and safely get out. It was a long night with information coming in quickly.

We had every type of media truck in the parking lot at the airport. The city manager and I did constant interviews with the media most of the night as information was coming in to us. I went home sometime around 3am to return at 6am Monday. As I arrived, I was being updated. The sheriff was on his way up from Placerville. The fire chief was making arrangements to take the sheriff, the police chief, and me to the burn area.

As we drove into ground zero of the burn area, the thick stench of burnt timber and building materials hung in the air. The blue sky Tahoe is famous for was gone and a gray haze of smoke surrounded us. Suddenly we could see the total devastation of homes and forest. Everyone was silent as if to pay reverence to the loss. Cars were reduced to metal hulls. Homes burned to the foundation. Smoldering ashes surrounded us of what was no more.

We stopped the car as the fire chief began to explain the course and intensity of the fire. A few feet from where we stopped there was a child’s bicycle, completely charred. The bike was in front of what used to be someone’s home. I could only think it was a miracle no one died.

That same Monday night was the first of three public meetings. I attended every public and community meeting regarding the Angora Fire during that summer. Not all locally elected attended those public or community meetings. They should have and this bothered me. The community needed all of us, even if to vent or have a shoulder to lean on. I wanted to be there for my community. This first meeting was in the gym at the middle school. The estimated attendance was 1,500. I think all the Angora Fire victims and their families were there; rightfully so, I sensed a lot of fear, anger, and questions.

The Forest Service firefighters, sheriff, CalFire, fire chiefs and others were there to answer questions and provide current information. TRPA Executive Director John Singlaub took questions but was quickly verbally attacked by the audience. It was a pivotal moment. Many in the audience believed that the fire was made worse by regulations forbidding homeowners from clearing adequate “defensible space” from around their properties. Every agency realized there had to be a collaborate effort to deal with defensible space in the future. It was an emotional night and we needed to provide comfort and answers.

Tuesday, I was again at the EOC, and we were briefed about the containment. It was of grave concern because the same conditions as Sunday, with high heat and dry winds, were expected. I went home for an hour to take care of my dogs. While outside with them, I saw a plume of smoke. I took pictures and immediately sent them to the city manager and the fire chief. I was told the fire had rekindled and spread quickly. Due to the conditions, it had broken containment and was heading toward South Tahoe High School, the Gardner Mountain housing tract and Tahoe Keys. A few moments later, while still in my back yard with the dogs, I began to see huge red glowing embers of wood blowing onto my roof and yard. I soon found out I was going to have to evacuate. Now I was experiencing what many others in the path of the fire had already been through.

My husband had been in Alaska since Friday on a fishing trip. He was at a remote lodge with no phones or cell service. I couldn’t contact him during the first few days of the fire. He was of no help. My son, who was able to return to his home that he had previously evacuated, came to get my things and my dogs. I was not organized and ran in a bit of a circle as to what to take and what to leave. My son said, “You have 2 minutes or I will carry you out.” I grabbed my dogs, dog food, leashes, my laptop, a few pieces of jewelry, some jeans and tops, and my son said I was done. As we departed, he grabbed a collage I had with pictures of the family.

We were trying to leave the Tahoe Keys area along with everyone else. We went to 15th Street first only to find it was blocked. After a long wait on Tahoe Keys Boulevard we made it out along with everyone else. Yes, it was a disaster and very frightening. To add to my concern, as my son was driving on Tahoe Keys Boulevard, I realized I had forgotten my pet bird. He would not turn around – it was bumper to bumper. My daughter also resided in the same area and I frantically called her. She left work and gathered her two dogs and a few possessions before evacuating.

My son dropped me off at the EOC. He took my things and dogs to his house. I needed to regain my composer; I needed to do my job. It was another night of horrible fires and valiant efforts to successfully save our high school and surrounding residences. I made my way home around 2 or 3am. I laid my head on the pillow fearing for my community. I could see Gardner Mountain was aglow with flames; we were still under siege. I got a few hours of sleep and then returned to the EOC. The following days brought more containment and resources until finally the fire was out. So many had fought this fire in order to save lives and homes; some that fought the fire lost their own homes in the process.

In the days, weeks, months following the devastation of the Angora Fire, it was clear we had to do everything possible to help our community. For those who lost everything, we had to be there to comfort and help them. We had city employees and we all had friends who lost homes. One of the councilmembers suggested we give up a month’s salary and contribute to employee victims, three of us did. Additionally, the City Council took action on July 12, 2007, to put in place city code changes and purchased supportive firefighting equipment including a wildland fire engine and new programmable radios. These changes along with defensible space clearing around city owned properties were positive steps toward future fire prevention.

In retrospect, the healing process for the community was both grief and joy. The losses were incredible, but so was the community support for the victims. So much so, the victims refused to be labeled anything other than “survivors”. The fire was an emergency. Nothing works perfect in an emergency, but from my viewpoint at the EOC and in the time following all agencies went above and beyond. While personal belongings, pets, and keepsakes were lost during the fire and can never be replaced, not one human life was lost nor was anyone seriously injured as a direct result of the fire. The devastation of homes and the fire damage is insurmountable and still scars our lives.

Kathay Lovell was mayor of South Lake Tahoe during the Angora Fire.