That’s what some people believe. And they took to the streets Monday to make their feelings known.

Ty Robben organized the Jan. 28 demonstration along Al Tahoe Boulevard. Robben’s issues started last fall when bounty hunters busted down his door. He’s been waiting for the South Lake Tahoe cops to finish the report. He even went to the City Council meeting last week to plead the electeds to intervene to speed up the process.

Within a week the report was done and passed on to the District Attorney’s Office.

But Robben said he is having a hard time getting a copy of the report. 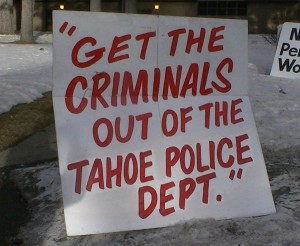 One of the signs at the Jan. 28 protest in South Lake Tahoe. Photo/Provided

“I think this is the moment for Police Chief [Brian] Uhler to shine or sink. I think Chief Uhler seems like a nice fella based on my experience and I hope he’s legit. Perhaps some of the people below him are the problem,” Robben told Lake Tahoe News. “The PD does good things too and I would prefer to not be their critic or on their bad side.”

At the protest on Monday people were sharing stories of their run-ins with local law enforcement. Drivers honked their horns in support.

When an unmarked police vehicle went by and suddenly turned on its lights for no apparent reason one protester wondered out loud if that was to try to intimidate those who had gathered peacefully.

“I do think that the totality of my situation and others warrants some kind of future discussions. Most people are very, very intimidated to speak up or stand up for their rights because of retaliation by police, the DA or the courts. I have been retaliated against, but protesting is one thing I can do and I have certain control over that right. For some of us, that might be the only justice we ever get,” Robben said.

Robben hopes future protests are not necessary – but he said there would be more if he believes there is a need to raise awareness about what law enforcement is or is not doing.

The planning of the protest unintentionally coincided within less than a week of Officer Johnny Poland being arrested on five federal charges dealing with witness and evidence tampering. Robben was planning the protest before Poland’s arrest.