Poland, who has been in and out of trouble with the department, has been under investigation locally and by the FBI for more than a year. That investigation culminated Jan. 23 when he was arrested without incident outside the police department.

He faces five charges related to trying to get others to change their testimony and tampering with evidence. The violations allegedly started on June 29, 2011, and continued through Dec. 20, 2011. 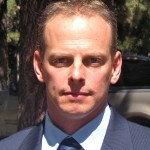 Police Chief Brian Uhler told Lake Tahoe News the charges have to do with charges Poland faces and not other cases.

Poland, 44, will be spending the night in Sacramento County Jail. He is scheduled to be in court Thursday morning.

Part of the federal complaint says, “In 2009, law enforcement had observed Poland, again off duty, in close association with gang members at a funeral.”

It goes on to say he was having a relationship with a gang member with whom he shared sensitive information.

The complaint says Poland in 2003 had sex with a 17-year-old South Tahoe High School student while he was the school resource officer. He was 35 at the time and married.

Poland has been on paid administrative leave since November 2011. That status will change to unpaid after the court hearing on Jan. 24, according to Uhler.

“We have a sense of conclusion or closure with the events that happened today. They were not unexpected,” Uhler told Lake Tahoe News.

Poland had been asked to come to the station Wednesday morning to fill out paperwork. He did. And then he was arrested in the parking lot.

Uhler said he met today with officials from El Dorado County District Attorney’s Office regarding state charges. A decision on whether more charges will be filed has yet to be determined.

Uhler is also working on what happens next in regards to Poland being an employee of South Lake Tahoe.

Previous post : People urged not to skate on Donner Lake Next_post : Hight may go to new heights at X Games