Leona Allen doesn’t know how many calls she received that first day. Working alone in the dispatch center on what was supposed to be a day off, what she does remember is the first call, her husband saying her 90-year-old dad was safely evacuated (his house later burned to the ground), the call not on Day 1 from Barton Skilled Nursing asking her to help move her mom because they were evacuating and having to say she could not leave work – which she didn’t leave for five days.

It wasn’t long into that Sunday five years ago that Allen learned her house was also one of the 254 that was consumed by flames.

Much controversy has centered on whether the flames could have been doused faster had the California Highway Patrol dispatch in Truckee not told callers it was a control burn, which meant those dispatchers didn’t dispatch resources.

An investigation followed, but the results are not known. Allen, who was involved with the investigation, doesn’t even know the outcome. She said a Truckee dispatcher called her asking if there was a control burn, to which Allen said, “No.”

Lake Tahoe News submitted a public records request to CHP seeking the report on the investigation. This is the state agency’s written response, “The department is unable [to] provide you with the requested ‘report from the investigation.’ The investigative reports are personnel documents, prepared as inquiries into the performance of department dispatch personnel. Pursuant to the Public Records Act, disclosure is not required of records that are ‘personnel, medical, or similar files, the disclosure of which would constitute an unwarranted invasion of personal privacy.’ (Government Code Section 6254(c)). The mandatory, rather than voluntary, contribution of involved personnel creates a privacy interest in the information that courts will recognize; see, e.g., California First Amendment Coalition v. Superior Court (1998) 67 Cal.App.4th 159.”

No one in Truckee or at the Sacramento headquarters would say if anyone was disciplined or if any policies were changed. Nor would anyone say why the dispatchers thought there was a control burn on the South Shore at that time.

All agencies on the South Shore that would have had the authority to ignite a prescribed fire say there were no controlled burns on June 24, 2007.

Every 911 call is logged into the computer aided dispatch system. 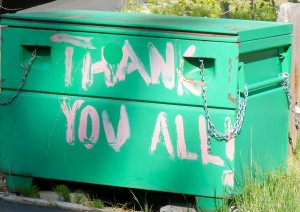 Residents to this day are still thanking firefighters for their efforts. Photo/LTN

Lake Tahoe News also sought the transcripts of the 911 calls from the Truckee office on June 24, 2007. CHP late last week said a recording could be provided. But FedEx was not able to get the disc to Tahoe by Saturday. When LTN receives it and if the audio is of publishable quality, we will release them.

Where a 911 call goes depends on the phone carrier and if the caller is on a cell or landline. In the past five years, more cell calls go to the area the caller is in instead of the nearest CHP dispatch.

El Dorado County Sheriff’s Office is dispatched out of Placerville.

“They monitor us, so the deputies knew immediately and took on the evacuations. They just reacted. I didn’t even have to call. It’s why we all listen to each other,” Allen told Lake Tahoe News. (Allen eventually left her dispatch job and now works for Lake Valley Fire Protection District as the communications specialist.)

Allen’s co-workers started showing up without being called in.

In addition to the mounting calls from people reporting what became known as the Angora Fire, during that first hour there were 10 emergency medical calls, including a structure fire that had nothing to do with Angora. 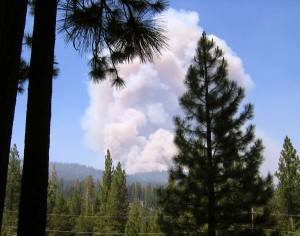 No confusing this plume of smoke with a control burn. Photo/Lake Valley Fire

Two dispatchers had to evacuate, but immediately returned to work. Twelve-hour shifts were the norm for five days. Cots were set up. Food brought in.

“I remember going to the first briefing with the Forest Service on Day 2 and I was still in the same clothes as when I started,” Allen said.

It wasn’t long before the fire was of such a magnitude that it was no longer considered a local event.

“When a fire gets so large that the local dispatch center cannot handle it, it is turned over to an emergency communication center in Camino, Gardnerville or Minden,” Allen explained.

When the feds get involved – which was the case because most of the land belonged to the U.S. Forest Service – and emergency aid agreements are triggered, a dispatch center for that specific fire is created. This happened on that first day of Angora.

Still, the local calls were coming in to the South Lake Tahoe center. All sorts of calls came in — one man said he knew how to fly a helicopter better and that the guys in the air were doing it all wrong. People called wanting to know if they should evacuate.

A big flip chart was set up in the center so the dispatchers could record what callers were offering (things like hotel rooms, a place for horses) and who to contact. Red Cross was provided all this info.

The little details that are huge to people in the middle of a tragedy were being coordinated by these men and women, like finding a home for 12 displaced bunnies.

Firefighters would call in with addresses of houses gone. The dispatchers had to keep working knowing the homes of family and friends were nothing but ash.

Allen says the only thing she would have done differently regarding the fire was to have commended her dispatchers sooner.

“The quality of a good dispatcher is maintaining your composure and quality of work when you know the vortex of fire is just down the road,” Allen said.