On June 24, 2007, along with 253 other homes, our little one at the end of Iron Mountain Circle burned in the Angora Fire. I had been working on it steadily since fall 1999 when I bought it with my wife, Michelle. Things slowed down when our son, Clyde, was born in 2002. The house was my big project, and, though I did a few small construction projects (and a little knife sharpening) for others, I was really just a stay-at-home dad.

I don’t want to dwell on the story of the fire itself or the immediate aftermath. Suffice it to say that we got out, should have grabbed a few more things, and hoped for the best. As I left, I said the quickest of goodbyes to the house, but I hoped it would be OK. I wasn’t really prepared to see the destruction of what we had created.

It didn’t survive, of course. Though, amazingly, our area remained relatively intact. Along with a few other homes on the street, the large spec house under construction across the street was fine. In fact, the crew there was back at work, painting drywall with a smoke-covering primer, while we were still sifting through our ashes. Luckily, however, many things survived. Our front landscape was more or less intact, as were the large Jeffery pines on three sides of us. Our back shed survived, and the firefighters had rolled my old work truck, a beat up 1973 Datsun, across the street after throwing many of my tools and our bikes into or toward it. On the side of the truck, a firefighter had penciled, “Tried to save it [meaning the house]. Saved your tools for work.” 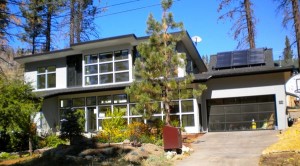 Our house, in fact, represented the southeast corner of burned structures in the fire. With the nearby trees still standing, the fact that we knew the site and loved its sunny south-facing aspect and location at the end of a cul-de-sac)and given my small (perhaps dangerously so) bit of construction knowledge and experience, we really never considered not rebuilding.

One of our earliest meetings was with Bret Alexander and Leslie Ames of Tahoe Solar Designs whom we knew through the backcountry and telemark ski community. Sitting with them near the ruins of our old sunroom, we knew that solar would be a principal element of the design of the new house. Passive was the way to go, while maybe augmenting with a solar hot water system. The large trees that remained across the street meant that solar electric was unlikely to be cost-effective, as those panels require continuous direct sunlight to justify their high initial price.

Less than a month after the fire, SiGBA — Sierra Green Building Association — had a symposium for fire victims at Lake Tahoe Community College on rebuilding green. At the Phoenix Sustainable Re-building Expo we met our architect, David Goldman of Environmental Architecture. Golman had lived in South Lake for more than a decade (in the 1980s and ’90s) but had moved away to further his education and experience in sustainable-energy efficient building. By what I can only call a stroke of fate, he had moved back to Tahoe a week before the fire. 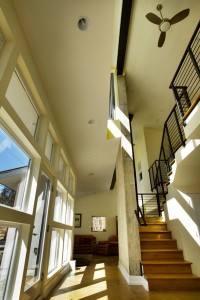 Early consultation with our insurance company suggested the base rate on the house was very low, but luckily (and through no fault of our own) we had many elements of our coverage that would double in case of a total loss. We were still underinsured, but when the company decided to give us the full cash value of our personal possessions coverage with no required inventory, it seemed that this was a sign that we should proceed and get our project going. Additionally, the county was doing what it could to help get fire victims building quickly. Expedited debris removal (somewhat controversial, I know) and allowing for plans to be submitted in phases (“foundation only” then full plans) also encouraged us to try and get a roof on before the big winter snows.

A plan was taking shape. The big thought was that running the project as an owner-builder (and being on site daily and helping in the construction where I could) would allow us to do something special at the site. And maybe, by creating a network of local builders (and architect Goldman), our project could show that building in a progressive, energy-efficient manner was a viable alternative to traditional construction.

It should be noted that I’ve hesitated thus far to use the term “green building”. It must be recognized that the fire occurred very near the peak of the real estate bubble, when contractors (and homeowners) were promoting all sorts of ways of adding value to real estate. Here in South Lake, the common practice was to buy lots (like the one across from us), ideally with a building allocation, and then build for maximum size and luxury. In other areas (notably the Bay Area), more environmentally sensitive projects were getting popular. An emphasis on energy efficiency and sustainably derived building materials and (sometimes) smaller, more efficiently designed spaces, was promoted under the rubric of “green building”. Of course, plenty of people (especially more traditional builders) noted the other connotation of “green building”, suggesting that you’d better have plenty of it (i.e., money) if that was your goal and you chose to work with “green builders”.

And, indeed, “green builders” do run the gamut. Some we worked with (whom I’ve mentioned) were fantastic. I cannot say enough about David Goldman. The collaborative process and the knowledge and experience he brought to the design were simply outstanding. My hope is that by signing on with Goldman quickly, we helped others make the same choice and that they were equally pleased with his work. Thus far, he has designed four other (completed and occupied) buildings in the burn and is the process of designing a fifth. They may not be to everyone’s taste, but I am sure that they are the most energy efficient structures in the area. 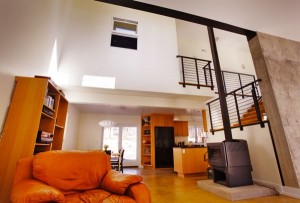 Rebuilding with green design features is paying off. Photo/Sunny Awazuhara-Reed

The hallmarks of his design are beautiful passive solar homes with an appreciation of simple and clean modern design. Most of the homes have wall systems that employ polystyrene (Styrofoam) insulation with cementitious materials (concrete or stucco and plaster) used for structure and/or finishes. One of his biggest innovations was elongating homes along their east-west axis for maximum solar performance. In several cases (not ours), the houses are actually offset from the normal street orientation to maximize this idea. With shallow north-south dimensions and lots of windows along the south-facing sides, these homes (in our very sunny climate) more or less heat up by themselves. And in summer, when overheating is a huge problem, correct sizing of roof eaves for shading is an equally simple solution.

In our house, we have additional energy saving elements, such as a centrally placed laundry and mechanical room with masonry walls to harvest the heat given off by our boiler and our domestic water tank (and the washer-dryer). Moreover, we have an architecturally impressive home with lots of glass out front (including two Trombe walls) and open ceilings and living spaces while still managing to keep the square footage down (1,900 total for the living space). The layout of the house is user-friendly, and, on sunny days at least, it heats (or cools) itself, depending on the season. We will never be able to fully repay Goldman for his great work here, but we did allow him to enter the design in the annual Tahoe Quarterly magazine’s architectural contest, winning for Green Design in 2010.

Likewise, Alexander and Ames of Tahoe Solar Designs were fantastic. I installed our radiant floor heat (as I had in the previous house) and even though there is (currently) no direct connection between that system and our solar hot water system, they provided consultation and direct assistance when I needed it. In the end, we decided on three solar hot water panels that are installed on our garage roof (specifically designed at an ideal angle determined by Alexander, Ames and Goldman) with heat exchange loops to our domestic hot water and our hot tub. The initial cost of the installation was quite modest while the savings are continuous. In particular, I don’t know if I could justify the expense of maintaining a huge pot of hot water (our hot tub) without the knowledge that it is reheated (or nearly so) on a daily basis for much of the year at zero cost.

These were not the only wonderful builders-suppliers and building professionals we worked with on the project. A couple of others, whom I consider more traditional builders (carpenters really) and with whom I particularly enjoyed working, side by side, deserve mention: Lenny Pratt and Eric Arnold.

On the other hand, however, we were extremely disappointed with several builders, building material providers and building consultants, some of who used “green building” as part of their marketing efforts. Many, I believe, had their own pre-existing financial difficulties that “forced” them to charge large amounts of money for poor quality work. In the end, I think it was more a sign of the (desperate) times and the fact that the burn represented a chance (sometimes, perhaps a final one) at a decent payday. Others, I think, were just inexperienced and believed that construction work, particularly if it were “green” or otherwise innovative, deserved (very) high pay for (very) average or even shoddy output. Luckily, by being as involved as I was with the project, we were able to keep these relationships short and the costs of working with these characters relatively low.

One of my biggest disappointments was repeated delays caused by our original engineer. (In the end, we needed three engineers to complete the project, with a special commendation to the final one, Randy Vogelgesang, for negotiating on our behalf with county building to allow us to receive our certificate of occupancy.) Despite all the good work of the county in helping expedite the project, the original engineer (recommended by the company that provided our insulated concrete forms, our primary wall materials) blew off deadline after deadline and delayed our project by seven crucial weeks that first fall. Despite relatively late snows we failed to get the roof on the building until spring. Perhaps if we had been able to roof before the winter, our project might have convinced even more people rebuilding in the burn to try a “greener” approach. (Not to mention saving us a lot of time, money, and snow removal.)

In the end, our building experience, like so many others, was (and continues to be) as big and dramatic an experience as the fire itself. The one event changed our world in a single moment (or day) while the other shaped our views on the community and, of course, the place we now call home: our house. Neither is perfect, of course, but both offer a lot to appreciate.