With some areas of the Angora burn having lost 100 percent of its trees, human assistance was needed to restore what a human was ultimately responsible for destroying.

Replanting of mostly Jeffery pines was what the California Tahoe Conservancy chose. The state agency owns about 90 acres of the nearly 3,100 acres that burned in the June 2007 fire. Of those, 40 acres had nothing left. 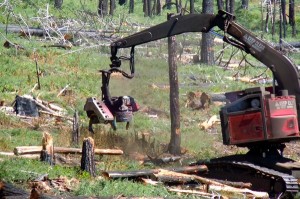 Mastication of trees like what the USFS did is also the approach the CTC took on some of its land in the Angora burn area. Photo/LTN file

Susie Kocher with the UC Cooperative Extension gave an update June 20 to the California Tahoe Conservancy board about the 40 acres that endured the high intensity fire.

Kocher explained how the loss was much greater than what a natural fire would have left behind. The Angora Fire whipped through the North Upper Truckee area on June 24 five years ago after an illegal campfire was not properly extinguished at Seneca Pond. Ultimately, it destroyed 254 houses.

While the forest is showing resiliency, Kocher informed the board that it would be 60 years before the forest returns to what the average person would call a forest. For now, the seedlings that were planted are just a few inches tall.

About 130 trees have been planted per acre. In addition to the Jeffery, sugar pines are the other primary species. Some incense cedar has been planted, but they are not thriving. This is because they prefer shade and right now it’s direct sunlight in the burn.

Kocher has been studying the recovery process on the CTC acreage since the first analysis of the burn was conducted in July 2007. A report was released this year about the restoration, with Wednesday’s meeting at Inn by the Lake being the first time the board heard the information.

“Where there has not been planting, there are very (few) trees coming back,” Kocher told the board.

Larry Sevison, chairman of the CTC board and Placer County supervisor, questioned whether the 86 tons of fuel load per acre was going to create a fire hazard.

Kocher said even though mulch from the masticated trees along with limbs are on the forest floor, the alternative would be leave the charred trees standing. Those would eventually fall, be in larger pieces and create more of a fire threat.

“Though the fire risk cannot be calculated at this time as computer models do not accurately predict wildfire behavior in masticated fuels, it is generally accepted that masticated fuels burn with lower flame lengths than natural fuels and are more difficult to ignite because compaction impedes the fire’s access to oxygen,” according to the preliminary assessment report of restoring CTC lands post-Angora that was prepared by Kocher and Daylin Wade of the CTC.

Kocher told the board when it comes to leaving the mulch, “It’s a trade off between erosion control and fire risk, but I can’t tell you how much.”

Norma Santiago, CTC board member and El Dorado County supervisor, questioned the threat of the white thorn growing in the burn area.

While Kocher called it a “fire adaptive species”, she said there is less of the prickly bush in the treated areas.

Overall, Kocher said the treatments applied to the Conservancy land have been effective. She said the ultimate goal of creating a healthy forest is on track five years after the flames whipped through the area.