I was working at the kitchen table in the middle of a languid Sunday afternoon in June when I heard Nancy call to me, “Hey, come look at this.” We climbed to our second floor and both took a look from our upper deck. We could see a small white wisp of smoke far off in the distance toward Angora Ridge, and remarked to one another, “Hmm, that looks like a fire.” I recall the memory fleeting across my consciousness of the eerie experience of the Oakland Hills fire from years back when I lived in the Bay Area. And I immediately came back to the present and became aware of the day’s weather in Tahoe – unusually high winds and hot.

“Not good,” I thought to myself. I felt my stomach pinch with uneasiness, but I went back inside hoping for the best despite an edge of disquiet. Only five minutes later, just as I settled back into my task, I again heard Nancy call, “You really need to come outside and look at this.”

This time I heard the concern and emphasis in her voice and it left me a little startled. I hurried outside.

As we climbed up on the boulders across the street from our house, that white wisp in the distance we saw only minutes ago had transformed into a now pervasive, ominous black cloud hanging low over distant neighborhoods and Angora Creek drainage. As we stood there, other neighbors too began to gather at the top of the boulders to gain a vantage point. We looked at one another and chattered nervously.

One remarked, “I’ve lived here 20 years; this is serious.”

Another climbed down hurriedly off the boulders and jogged toward the fire station only three doors down on the corner. Minutes later, she returned saying, “Yes, it’s been reported and they’re on it. It’s under control.” We could take no real comfort from the report because of the dissonance of the scene we were living.

Now as we watched, we could make out bright red flames through the black smoke. It was clearly a fire and it was spreading fast. It was obviously in the tree canopy and the wind was whipping the speed of the spread. The neighbors looked at one another a last time and agreed, “We need to get out of here now.” 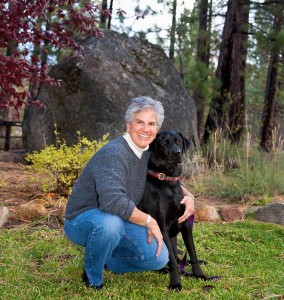 One of Joanne Marchetta's first priorities was to make sure her dog Zin got out of the fire safely. Photo/Joy Strotz

As we scrambled off the boulders, I took one last look that said it all. From that high vantage, we could no longer see through the wall of black smoke, but we could see the orange red flames of the crown fire on Clear View Circle only a block and a half away. The fire was headed straight toward us and was nearly on us.

It had been less than 20 minutes since we first saw the small white wisp in the distance.

We scrambled off the boulders and sprinted to the house. Now my heart was racing. We threw open the door, looked at one another with that twinge of adrenaline charged panic and succinctly agreed, “Get the dog and the fire box.” Beyond that, I recall grabbing one arm-full of clothes out of the downstairs bedroom closet, another arm-full from the chest of drawers and scrambled into the garage. I threw what I had grabbed into the back seat of the car. As I had passed by the kitchen window, I could see that the roof of the house behind ours had caught fire and recall yelling, “We need to get out now, the house behind us is burning!”

Nancy made sure the dog was safely secured in the car. Then we each stood for a brief moment in the garage with one car parked behind the other. Nancy said, “Should we take one car.” I said “No, we need to take both; I think it will be all that we have left after this.”

We quickly arranged to meet at the Raley’s parking lot to regroup. And as we pulled away from the house, we joined a procession of cars headed toward the Y, moving slowly but moving steadily away.

Only minutes later we rendezvoused at the Y shopping center, feeling bewildered and anxious. Noticeable were the burning and charred embers floating on the winds of that afternoon, and the smoke stinging our eyes and airways. We spoke briefly to neighbors again to trade cell phone numbers to make sure we could reach one another.

I said, “We need to get out of the basin, it’s still spreading.”

Not sure exactly where we could go, we knew we couldn’t stay stationary and again headed east on 50 trying to put distance between us and the fire. We stopped briefly at a point familiar at least to me, the TRPA parking lot, and regrouped again. Even at that distance, embers swirled in the air around us, carried miles from where we had last seen the fire. From there, we called friends in Gardnerville, asking if we could head their way. “Of course,” they said. “We are in Placerville and headed home now.”

They knew nothing at that point of the day’s event except they could see smoke even in Placerville, so they knew there was fire somewhere. We hung up the phone and dropped down Kingsbury out of the basin.

That evening, looking from the valley back toward the 10,000 foot mountains of the Lake Tahoe Basin, black smoke poured relentlessly out above the peaks into the upper atmosphere. We talked with our friends, but I don’t really recall anything we discussed. We were glued to local TV news reports. All I recall is the image of a certain TV clip replaying again and again that showed our back yard on fire, the dead and down logs in the back of the lot were burning. We couldn’t see the house in the blackness of the background of the video footage, but every time it played, I kept straining to try to see through to the image of the house. It lent no answers.

I haven’t owned or watched TV in 20 years for exactly this reason – it disassociates truth from experience. I didn’t know what to think, and ended up thinking the worst based on the TV clips, but honestly I could barely think a lucid thought at all. I felt numb and appreciative that we had good friends to be with in that moment.

I spoke briefly at about 9pm with Norma Santiago, El Dorado County supervisor and one of my TRPA board members. She knew I lived in the county, and was kind enough to call to find out my house number and location. She said she would let me know if she found out anything definite. In the middle of the night, my cell phone rang.

“Your house is standing.”

I made her repeat it, both the house number and the result. Again she said, “The best information we have is that your house is standing.”

I thanked her and cried just to release pure anxiety.

We stayed at MontBleu for 10 days afterward: with the dog in our hotel room, living out of the trunk of the car where we had flung the random belongings we grabbed without even a moment to think, and wearing the eclectic mix of clothes we had grabbed in the flurry to flee.

We were lucky. We were among those able to return to a house intact. We had defensible space, and that may have helped to save us from devastation. Even so, the fire seemed capricious. The winds had been so fierce and squirrely and the fire moved so fast, it was hard to say why one and not another house burned. The house with the cedar shake roof just across Lake Tahoe Boulevard withstood the siege while almost all of the houses farther up Boulder Mountain burned. It turned out that the fire claimed only two houses on our street – both on the corner and directly across from the Lake Valley Fire Station – nothing but cinders left of them. The fire melted the siding off a third house and then moved on.

The experience left me with an indelible truth. We are blessed to live in a forest and to call it home. With that privilege comes a special responsibility to live lightly, responsibly, and as special stewards of this magical and spectacularly beautiful place we are so fortunate to call home and haven.

I thank the firefighters for risking their lives to protect us and I thank the community for coming together afterward to help those who lost so much. I am proud to call Tahoe my home and my reverence for the place and the people has only grown since the humbling experience of nature’s indomitable force that we were so powerless to reckon on that night of June 24, 2007.

Joanne Marchetta is executive director of the Tahoe Regional Planning Agency and was chief counsel for TRPA at the time of the Angora Fire.