One of South Lake Tahoe’s most famous landmarks has carried countless skiers and boarders up the steep slopes of Heavenly Mountain Resort’s lake-facing ridge. It has carried a history with it – one that has stood the test of time.

The tram has been operating for 50 seasons.

From old-timers to modern-day users, the tram in six minutes has whisked riders up to the back slopes. It can cart 600 people an hour up the mountain. Near the top is a restaurant, which has changed names a few times since the lift’s inception in 1962. It’s now a burger joint with a bar called Booyah’s.

South Shore’s longtime skier, former Heavenly employee and Olympic volunteer Martin Hollay still makes the tram part of his morning ski ritual. Hollay lives a few blocks away — his home base since going to work for Heavenly in 1964. 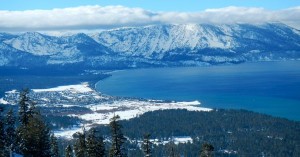 Views from the tram are one reason people continue to ride it from Heavenly’s California Lodge. Photos/Kathryn Reed

He likes the views from the tram and said he’d be heartbroken if it were taken out. The views are unparalleled, sweeping 180 degrees of the lake’s south shore.

“It should be kept because it’s a big part of Heavenly’s history,” Hollay told Lake Tahoe News.

Although the tram is documented in the 2007 Heavenly Master Plan, its days could be numbered once the redevelopment plan involving the California Base Lodge is launched. This is according to Heavenly and confirmed by the Tahoe Regional Planning Agency and U.S. Forest Service. A smaller lift situated closer to the ground will replace the tram. It is proposed to land near the top of the Powderbowl chairlift.

“Its removal is no longer tied to the implementation of the gondola,” said Andrew Strain, Heavenly’s planning chief. The Heavenly Gondola opened in 2000 near Stateline from the Highway 50 street level.

The scenic impacts of the building and towers were discussed by TRPA back then, but never fully addressed. The new plan was approved in 2007 by the regulatory agency.

Fisher uses the tram because before he hits the slopes he likes “to tinker” with his gear. One can do that while standing in the tram. Other than that, he treats taking the tram versus the other lifts as a difference between an escalator and elevator.

“It has served the ski area well,” he said. 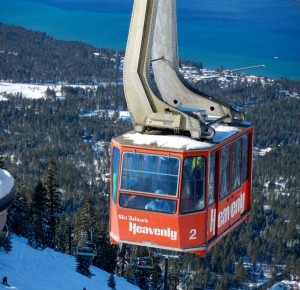 Heavenly’s tram has been transporting people for 50 seasons.

Tram proponents — including former employees — hope there is as much room for the lift in the town as there is in the hearts of its residents.

Malcolm Tibbetts, Heavenly’s former vice president of mountain operations of 32 years, remembers working with the tram like it was yesterday. However, the place looked a lot different and wasn’t owned by Vail Resorts.

“When the tram was first built, it was a separate company, but it didn’t stay that way very long,” he told Lake Tahoe News. “Back then, the lifts were numbered.”

There were three chairlifts and two rope tows. The tram was completely rebuilt in 1986 – making the new one faster and larger. The new one doubled the number of passengers to 50.

“As a tourist lift, it was fantastic,” said Tibbetts, who still lives on the South Shore. “From a marketing standpoint, it probably paid for itself.”

“It’s a part of the Heavenly history,” he said.

Tibbetts recalled how employees would unwind at the top building known decades ago as the Pioneer Hut.

“It was added onto through the years,” he said. “We loved to do our own construction.”

The tram turned out to be a bane and a blessing. It needed much maintenance, creating a “huge headache” for the mountain operations workers, Tibbetts added. “It had its quirks,” he said.

One morning, all but one member of the ski patrol was caught in the tram when one of the cables “reversed,” making it necessary to slow the tram down to a “creeping” speed a half hour before the mountain opened.

The restaurant that came to be known as Monument Peak was a steakhouse where workers and old-timers staged last-minute parties.

Some parties were more memorable than others.

About a decade ago, a spine-tingling version of “God Bless America” was sung by a host of pioneering South Lake Tahoe families who gathered at the restaurant to honor the late Patsy Gilman Wood. Her husband, Robert Wood, was a founding partner of Heavenly and was on hand to help lead the group in singing her favorite song. (Patsy Wood has a run and lift named after her, but is not related to this reporter.)

The Woods were instrumental in getting the tram off the ground in 1962.

Today’s riders are more than grateful of the effort.

“We always ride the tram,” said local skier Jill Berliner on a recent morning with her son, Bram Sigman.

He noted how many riders are scared to go up the tram because of how steep the ridge appears.

They also know when the gondola is on wind hold, the tram is often a last hold-out to get on the mountain.