Five years later and people are still wondering how they will evacuate safely from the Lake Tahoe Basin in an emergency, if a reverse 911 system has been installed, and how to get their neighbors to get rid of that shake roof.

While a panel of agency officials sat on the stage of the theater at South Tahoe High School on Monday talking about what they have done in the five years since the Angora Fire, it was more personal information the audience sought.

But answers for them were few or limited.

Gaines said he would look into the sign question. As for the tax, he calls it double dipping. The money collected from homeowners won’t help CalFire or any firefighting efforts.

Keenan explained the tax means $89 million for CalFire, but in reality the department’s budget from the state has been reduced by that same amount so the tax is not a net gain to the state fire agency. What people are paying for is unknown. The tax really goes to the general fund to be spent however the governor and Legislature want.

A resident in the Lake Valley area asked what to do about a neighbor who believes doing nothing to their fire prone-shake roof is fine.

Harris said his district received a $5 million grant from FEMA to deal with just that issue. The money is available to assist homeowners in Lake Valley, Meek’s Bay and Fallen Leaf Lake fire districts.

But Harris also encouraged residents to call their local fire department about any defensible space issue and have the firefighters be the bad guys and the court be the enforcer if it were to get to that point.

Angora burn area resident Susan Ward told the audience of more than 100 how she never received a reverse 911 call five years ago. No one told her Monday night the reason there was no call is because the El Dorado County Sheriff’s Department thought the governor had to make that decision. Not so. The county has the capability to use this system without Sacramento’s OK – so do other jurisdictions.

While El Dorado County Sheriff John D’Agostini and South Lake Tahoe Police-Fire Chief Brian Uhler attended the forum, neither spoke and neither stayed until the end. They would be the ones to answer how the 911 system works.

The other issue Uhler and D’Agostini could have addressed is the evacuation plan because that is the job of law enforcement. None of the speakers could give any details about how people will be evacuated in the event of an emergency.

It was total chaos five years ago that proved whatever system might have been in place did not work. This proved true the Sunday the fire started and then the Tuesday when the Tahoe Keys area was evacuated when the fire jumped Highway 89. 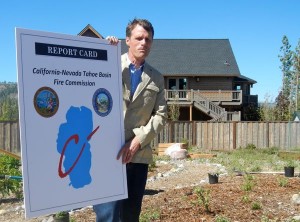 State Sen. Ted Gaines reveals the agencies in the Lake Tahoe Basin barely received a passing grade based on the lack of implementation of recommendations post-Angora. Photos/Kathryn Reed

Gaines had asked the non-partisan Senate Office of Research to examine how the 90 recommendations issued by the bi-state Blue Ribbon Fire Commission that was convened by then Govs. Arnold Schwarzenegger and Jim Gibbons had been implemented.

Sixty have been completed and 10 are in the process. To this, Gaines gave the effort a C-minus grade – barely passing by most standards.

One recommendation of the bi-state commission was to, “Adopt the priority of life, property, and the environment, in that order, with respect to fire safety and fire prevention.” The action taken, according to the report released Monday, was, “Implemented.”

Firefighters have those priorities, but those who control the basin have a different agenda. Water quality is one. Spending grant money to keep their jobs is another. Planning and more planning without implementation appear to be other priorities.

He doesn’t understand when people talk about the importance of Lake Tahoe how protecting it from a devastating fire isn’t at the top of the list. He pointed to the Democrats in the state Legislature not wanting to fund projects that would help Tahoe.

One of the recommendations was to create an 800 number for people to call for information about defensible space guidelines. But the number provided in the report went to a personal residence when Lake Tahoe News called it Monday night.

An “undetermined” was the action for the recommendation, “To avoid continued confusion regarding interagency communications during wildland fire occurrences, all dispatch centers and responding resources in the Tahoe basin will adhere to the existing agreements.”

Considered “implemented” was the recommendation to, “Work with their respective congressional delegation to establish an annual sustainable fund for forest health for the Lake Tahoe Basin.”

But the people speaking on the stage Monday said money is an issue and there is no “sustainable fund” for fuel reduction or firefighting. Congress has not reauthorized the Lake Tahoe Restoration Act that supplied the initial money for environmental projects that included fire related activities. SNPLMA funds are about exhausted. And some entities in the basin would like the remaining Southern Nevada Public Lands Management Act dollars be spent on a loop road on the South Shore instead of fire related issues.

One of the recommendations that was found to be “undermined” was, “Find more stable, long-term funding to replace the stopgap funding provided by the states, likely through the collection of a parcel fee or similar special assessments on property owners.”

Everyone in at the forum would likely have categorized that as “not implemented”.

Going into the burn

Before the evening meeting, Gaines went on a tour of the Angora burn, witnessing the forest as it looks today, talking to homeowners who have rebuilt and seeing a community garden that has sprouted from the ashes.

“We all move to Tahoe because it’s beautiful. We stay because of the people,” Marsha Hudson told Gaines. She said having an evacuation to-do list on the inside of a cupboard helped her family retrieve more belongings than they would have otherwise remembered in such a stressful situation.