Publisher’s note: This is the last of three stories about Edgewood Companies.

STATELINE – Brooks Park, the mastermind behind so much of what Edgewood Companies developed at Lake Tahoe under the business’ former name of Park Cattle, envisioned lodging on the golf course.

Eleven years after his death, the environmental document for Edgewood Lodge is expected to be released this fall in draft form. It’s possible construction on the $150 million-plus project that is slated to have 126 standard rooms, 24 regular suites, four deluxe suites and 40 interval ownership units could break ground in 2013.

It’s all about providing the complete Edgewood experience, is how company officials tout the high-end hotel. 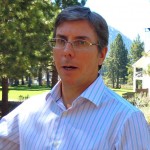 Besides adding lodging to the Stateline golf course that sits on the edge of Lake Tahoe and is home to the annual celebrity golf tournament each July, the company expects to put a rough estimate of about $2.5 million into water quality projects that go beyond what is necessary to complete the lodge.

Patrick Rhamey, vice president of real estate for Edgewood Companies, said in part the extra effort is to prevent the League to Save Lake Tahoe from filing a lawsuit. While the League has been invited to take the same tour of the site Lake Tahoe News went on this month, Rhamey said no one at the League has taken him up on his offer.

What the public will notice

Holes 7, 8 and 9 will be altered to accommodate the lodge, with No. 9 having the most substantial changes.

With the last three holes of the 18-hole course being known for their scenic qualities, 9 will share that distinction in the future. 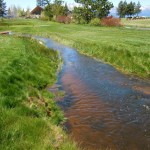 Edgewood Creek will be restored.

Brandon Hill, project manager, said, “They’ll finish 9 on the beach. It will be a dramatic, compelling improvement.”

It has to change because the lodge is expected to go where the current fairway for No. 9 is.

Hole 13 will be raised a bit so it’s not so swampy like it has been this year with all the moisuture the basin has received.

Construction schedules will not interfere with the celebrity golf tournament, officials said.

Non-golfers will have access to a stretch of beach that is currently private.

The road leading into the area will be rerouted a bit so it heads more to the left, ending at the lodge. Parking will be in a structure at the lodge.

The current lot will be removed. The beach will be brought up farther from the lake.

The current restaurant/clubhouse will be extended toward what is now the parking lot so larger banquets and weddings may be accommodated.

A path along the entry road will be designed for cyclists, pedestrians and golf carts. It will tie into the Stateline-to-Stateline bike path, which passed its last hurdle last week with the U.S. Forest Service signing off on the South Shore demonstration project.

While Edgewood Companies owns about 500 acres on the South Shore, the 4,000-acre Edgewood Creek watershed almost entirely ends at the golf course. This is water that is not being treated at today’s standards before reaching the lake.

Highway 50 and Kingsbury Grade carry the nastiest pollutants through the golf course’s network of pond filtration systems. Ultimately it comes out in a culvert off the 18th hole.

How all of that works will change – including reconfiguring Edgewood Creek through the course so it looks and acts like a stream instead of resembling a man-made concoction.

The company has expanded its original water quality improvement vision to include Friday’s Station on the other side of Highway 50. This is where the big white house sits.

On the east side of that property is a large pond, with the water being held back by an earthen dam that is at least 60 years old. An ancient wheel controls water flow, with the outflow being at the bottom – thus sending more sediment downstream. 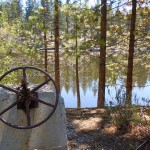 The pond at Friday's Station will be drained and revamped.

This land was once pasture for the cattle that were here June to October. The pond was used for irrigation and fishing.

Making sure the dam is stable is another component.

The sediment from the pond will be excavated to allow for more storage, to reconstruct the dam, change the outflow and reroute the overflow area.

Water from the Stateline Stormwater Association, which encompasses the casinos, first hits pond No. 6 on the golf course. (Pond numbers correspond to the hole its on.) Dredging this and other ponds is part of the plan.

Pond 14 will be removed to make for a more natural flow of Edgewood Creek. Fish will be reintroduced to the creek.

Other ponds will be improved as well. Vegetation will be planted to better stabilize the soil and provide habitat for animals. The idea is the wetlands will be restored, too, as well as doubled in size.

“We are going to increase the amount of time water is in contact with vegetation,” explained Jason Drew with Nichols Consulting Engineers.

Revamping the courses fertilizer management plan is part of the bigger project. Rhamey said the course does not use much fertilizer now.

To build the lodge, Edgewood Companies had to procure tourist accommodation units from South Lake Tahoe. That was achieved earlier this month.

The original plan was to take ones from the Horizon hotel, which it owns. But the thinking now is for that site to be viable after Columbia Sussex’s lease expires July 31, 2014, the TAUs need to be in place. 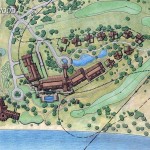 Rhamey does not foresee extending the lease again, but instead having Edgewood Companies take control of the property.

“We are looking at a full range of options,” he said without being specific about the Horizon. “It’s future we think a lot about, but we don’t know yet.”

“The changes in the design program come from being responsive as we’ve been listening to public sentiment over the past two years,” Hill said. “We’ve been specifically monitoring other projects in the region and have seen that time and time again, the public has requested that projects reduce in size, scale and massing in order to better fit in with the Lake Tahoe environment.”

The lodging will be built in stages, with the main hotel in the first. The casitas, which will be detached and sold in yet to be determined intervals, will have four to six units in each structure.

Edgewood is weighing options when it comes to bringing in a flagship hotelier to run the operation or doing it in house.

LEED certification will be sought, but the level has not been decided. A living roof is part of the design.

A bistro-style restaurant will offer meals three times a day. A high-end spa will be open to guests and the public.

Turning the golf course into a destination for cross country skiers and snowshoers is being discussed.

More information about the project is online.

This is an Edgewood Lodge rendering, the lodge site plan and the full site plan.