ZEPHYR COVE – Suddenly the sun is gone. Plants wither. People and animals die. No air to breathe. No water to drink.

Briefly, all of this happened at Zephyr Cove Elementary School on Jan. 15. It was all to show the students how important the sun is to the survival of life on Earth.

They actually showed themselves as they took on various roles.

In a whirlwind of interactive learning, students in Brenda Capshaw’s third-grade class are being taught about the solar system. Diane Handzel is taking over the class for an hour for eight Tuesdays to teach them a bit of science through theater.

The students act out parts in a variety of skits. It’s nonstop action even though it’s part lecture, part video, part question-answer, part acting. There is no down time. It’s all about learning, even if the kids think it’s playtime. 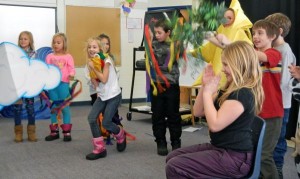 Third-graders at Zephyr Cove Elementary on Jan. 15 learn about the sun. Photo/Kathryn Reed

This is the third year Handzel, who runs Get in the Act! Arts in Action, has worked at Zephyr Cove. And in that time science test scores have gone up.

“There is no real data that Arts and Action helps life science scores, but I like to think it did,” Principal Nancy Cauley told Lake Tahoe News. “Not only are the students learning facts about the solar system, they get to act out in crazy, creative ways that kids love.”

The money to pay for the Arts and Action program comes from the parent-teacher club.

The third-graders are broken into groups representing animals, humans, water, land and air. Amongst themselves they are to figure out why their group is the most important to the Earth. While they all came up with viable reasons, in the end, it was the sun that is ultimately the most important.

When asked what they learned about the sun, they raised their hands, to say: it’s made of gases and atoms, it’s the only star in our solar system, it gives off light and energy, without it the Earth would float away because of the lack of gravity, and that it’s the center of the solar system.

Handzel and a colleague created the Stateline company in 2009. They work throughout the Lake Tahoe Basin – including Tahoe Valley Elementary School in South Lake Tahoe, Truckee Elementary, and Tahoe Lake Elementary in Tahoe City.

“We work with the teacher and the classroom curriculum,” Handzel told Lake Tahoe News after wrapping up the sun segment. (Next week she will focus more on planets.) It’s about introducing vocabulary and science concepts. And it’s geared to the appropriate grade level.

Second-graders might learn about magnets, while fifth-graders get instruction on electricity.

“I believe she has had an impact on how kids see the world through science,” Cauley said. “They have a better understanding of science because they were able to use every sense of being to act it and be it.”