This book title is exactly what many women want to tell lawmakers. With a cover of the Statue of Liberty holding a sheet of paper covering her crotch, there is little doubt about what this compilation of 21 essays is about. 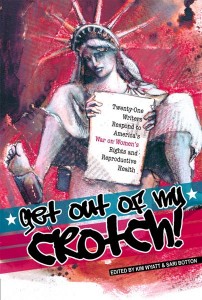 It will be released Jan. 22 – on the 40th anniversary of Roe v. Wade, the landmark U.S. Supreme Court decision legalizing abortion.

It’s not a book about abortion. It’s about women, politics, freedom – or the lack of, bodies, and today’s culture.

“Get Out of My Crotch” is rooted in anger.

“I got really mad last spring about hearing about legislation based on menstrual cycles. Every day I would come to work and hear a story about a bill being proposed talking about personhood, or transvaginal ultrasounds, or redefining rape and I could not believe people were not storming the streets,” editor-publisher Kim Wyatt told Lake Tahoe News. “People were talking about this like it was acceptable. I felt like I had to do something.”

The Meyers book publisher created Cherry Bomb Books – an imprint of Bona Fide Books – to be the home of “Get Out of My Crotch”.

The works and writers are:

• “Knocked Over: On Biology, Magical Thinking, and Choice” – Martha Bayne

• “I Know Who You Raped Last Summer” – Kevin Sampsell

• “Binders Full of Women, Episode 1: The Story of Mary and Bill” – Rebecca Cohen.

Botton is the co-editor with Wyatt. She was working on a book about Roe v. Wade when Wyatt came up with her book idea.

While there is a clear audience for the book, Wyatt hopes it will reach younger readers. She wants young women to understand the freedoms they may take for granted are incrementally being taken away at the state level.

“I have lot of young women working here. We talk a lot about politics,” Wyatt said. “Last year they were completely checked out from politics because they didn’t like the BS partisanship. They weren’t paying attention because they were tired of all the chatter.”

She believes this book is for them.

A discussion guide as been created in case educators – more likely college level – would incorporate “Get Out of My Crotch” into their curriculum.

Go online to order a copy of the book.

• Jan. 22, 7pm: Book launch in Portland on the 40th anniversary of Roe v. Wade at Crush, 1412 SE Morrison St. Readers include “Get Out” Portland contributors Sarah Mirk, Kevin Sampsell and Lidia Yukanvitch. A portion of the proceeds will go to Planned Parenthood Advocates of Oregon.

• Jan. 25, 7pm: Lake Tahoe Community College Writers’ Series hosts a reading of “Get Out of My Crotch” in the library. Short reading and discussion with contributors Janet Frishberg and Camille Hayes, as well as publisher and co-editor Kim Wyatt. Books will be available for purchase.