Copper thieves stole an estimated $50,000 worth of pipes from Camp Concord.

The January crime is similar to the thefts that occurred last fall at Emerald Bay and D.L. Bliss state parks.

The suspects, who remain at large, broke into the restrooms at the South and West shore facilities and took out the copper piping to presumably sell as scrap metal. 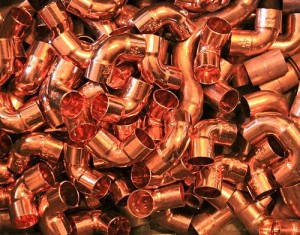 The price for scrap copper can change on a daily basis. In California it can go for more than $3 a pound. (South Tahoe Refuse does not buy scrap copper.)

According to the U.S. Department of Energy, copper thievery is about a $1 billion a year business.

A law that took effect Jan. 1, 2012, in California makes stealing copper with a value of more than $950 grand theft. A felony conviction can come with a three-year prison sentence and $10,000 fine.

Van Arnum believes the same person or people could be responsible for the thefts in El Dorado County.

“The method of operation was pretty much the same,” he said.

The lieutenant said no other jurisdictions in the Lake Tahoe Basin have reported similar thefts.

His department is responsible for the Camp Concord investigation off Emerald Bay Road. State Parks has its own law enforcement team. However, the two do share information and work together when appropriate. The sheriff’s office also works with the state copper task force.

“We know in the materials alone it will be about $15,000 to replace what was taken. Because we have our own maintenance staff, the labor we did not cost into that. If we contracted out, it would be higher,” Brian Barton, chief ranger for the Tahoe area said.

But the restrooms at the two parks have not been fixed because there isn’t the money to do the work. Barton is hoping by the time the parks reopen at Memorial Day that the restrooms will be serviceable.

Barton said a material other than copper is being considered for the replacement pipes.

All of the locations that were hit aren’t used in the winter, so the exact dates the thefts occurred is unknown.

“We don’t know how they got in. We feel someone had a key to our gates because the gates were not damaged,” Barton said. He said a current employee is not believed to be involved.