Sitting in the snow, as snowboarders often do, the three friends chat about what it’s like to be on the slopes.

This is Day 2 for these fifth-graders from Sierra House Elementary School. And it’s not exactly what they thought it would be like.

Camille Dahili, Yesenia Garcia and Serena Palaroan all agree snowboarding is more difficult than they expected, but it’s way more fun, too. Balancing and stopping are the hardest, they say. 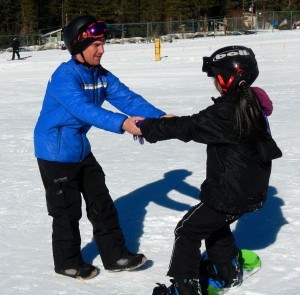 For three days all fifth-graders in Lake Tahoe Unified and St. Theresa School learn to ski or snowboard at Heavenly Mountain Resort. And if they already know what it’s like to have a plank or two strapped to their feet, they are paired with an instructor who can cater to their appropriate level.

“We think three times is enough to get a taste … to learn to turn and stop, ride the lift safely, a little bit about skier and rider etiquette, and the skier responsibility code,” Mike Allen, Heavenly’s director of skier services, told Lake Tahoe News.

The program has been in place since at least the late 1980s.

Allen said this age level is ideal for first-timers.

“It’s an age when kids get their own sense of independence. They have good strength, good sense of balance,” he said.

It’s not all fun and games – even if the kids don’t realize this.

“It’s an extension of the classroom,” Sierra House Principal Ryan Galles said of the ski program. “There is the PE benefit, learning about health and safety. We live in a mountain town so safety decisions are a huge piece of the discussion. We do writing activities with this before and after.” 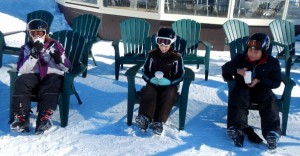 For many of these kids, this is their first time to be at a ski resort. Galles estimates almost half of the kids have not skied or boarded before.

There is something about food and skiing that go together – whether it’s making a pizza with skis in the snow, or putting them together like a sandwich when taking a break, or holding poles like a cafeteria tray and not spilling.

These little triggers are ways ski school instructors help youngsters to learn to be better skiers.

Lily Smith, who isn’t new to the sport of skiing, said, “I like challenging yourself and having fun.”

She is paired with Christian Arcinega-Pineda and Bryona Ziegler. 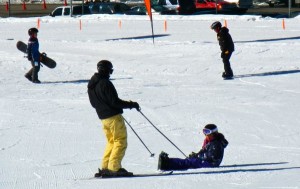 Instructor Gavin Lynch gives them advice as a group about how to hold the poles in front of them and individual tips as they ski to him.

Arcinega-Pineda said he’s learned “how to control myself down the slope.”

Mostly it’s all smiles — except for the the snowboarders when they fall. But that is another part of the learning process.

Previous post : Tahoe Tails — Adoptable Pets in South Lake Tahoe Next_post : LTN giving away copy of ‘Get Out of My Crotch’