Puttanesca probably wasn’t on a vocabulary or spelling test when Klaire Pirtle was principal of Kingsbury Middle or Minden Elementary schools.

That’s because the Italian dish is better known as “whore’s style spaghetti.”

The retired Douglas County School District educator helped her daughter, Amber Asbjornsen, whip up a bowl of puttanesca worthy of being posted on the Beauties and the Feast blog. 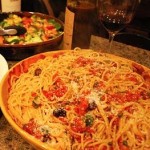 Puttanesca from Beauties and the Feast. Photo/Amber Asbjornsen

The blog’s subheading is: Six beauties. One feast. One blog where we gather to dish our reviews.

Asbjornsen is one of the beauties who started the blog a couple months ago with five friends from college. The 1998 Douglas High School graduate took a home ec class there, but is not attributing her culinary expertise to that experience.

Five of the friends live in Washington state (they all went to Western Washington University) and one is single and traveling.

The blog emerged from casual emails sent among the friends.

She admits with a full time job, husband and two kids to not having much time for extra things like a book club, but thought something virtual would allow her the flexibility and fun she was looking for.

From there, Beauties and the Feast was born.

Each month one of the six posts a recipe. The others all try it and post comments on the blog. In between there might be “extra” recipes like a special cocktail for the Super Bowl.

“I knew I wanted to try puttanesca. I looked at a million recipes. Then I made up my own recipe from those and I posted a little history lesson about what it means,” Asbjornsen said.

On the blog she also gives her mom a ton of credit for the dish.

“My mom is my biggest supporter. They didn’t laugh at me when I was taking pictures of my food,” Asbjornsen said. “When we get together we do a lot of cooking.”

She considers cooking a creative outlet, and now the blog is an extension of that.

“I’ve never considered myself a chef, but I love cooking and I love cooking for my family,” Asbjornsen said. “Both of my parents stressed sitting down with our family an eating. We still do that now.”

The women don’t know where this will take them.

Megan Crosby is the single friend who is exploring the world.

Missy Cudworth is a mom of an 11-month-old and writer for the Delilah show.

Jolie Lucero is a stay at home mom of two.

Emily Adamson is married and does social networking for her job, so is the blogging expert. “She is the real foodie of the group,” Asbjornsen said.

Rachel Strachan is married, living on several acres as sustainably as they can.

Making money off the site would be the dessert, so to speak, to the whole project. For now, though, it’s all about sharing their love of food with the rest of the world.