STATELINE — The final cuts to close what had been a $6 million budget gap were made Tuesday night by the Douglas County School District board of trustees.

It was a somber mood for much of the five-hour meeting at Kahle Community Center. This venue provided ample room for the more than two dozen people in attendance. Usually the meetings at the lake are at the county library – a much smaller setting.

The significant change the seven-member board made from what Superintendent Lisa Noonan recommended for the $48 million general fund was to slash about $40,000 from the athletic budget. Although at first it was going to be a direct hit to the $261,914 allocation for stipends, in the end the board said the funds could come from anywhere but transportation. Chief Financial Officer Holly Luna advised against touching bus dollars based on the intricacies of how that department works.

“If I have the discretion, I can make it work,” Douglas High School Principal Marty Swisher told Lake Tahoe News after the meeting. The school site administrators are tasked with trimming the sports department. 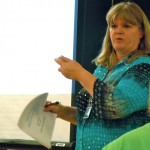 The savings will be used to restore the student intervention funds that had been cut at the March 30 meeting.

The federally funded one-time EduJobs dollars altered the budget in the last two weeks – in the positive. Noonan’s ideas for spending the $526,693 addition to the general fund were approved by the board. It means keeping one trimester each of music, art and physical education at the elementary level. It also restores $156,627 for elementary computer aides.

The tentative budget per Nevada law had to be approved this month, with the final 2011-12 budget coming before the board in May.

With the state not expected to have a budget until June at the earliest, and with some people predicting two special sessions, it could be well into summer before the Silver State has a budget. Until the state passes its budget, in some ways it is a guessing game for all districts as to what level of funding will come from Carson City.

“I’m worried about the students, but also if we add to unemployment – what it does to the overall community,” Noonan told Lake Tahoe News during a break.

Nevada K-12 districts must notify certificated employees by May 1 if they will not have a job for next year. Classified must be told by mid-May. The exact number of employees losing their job hasn’t been tallied based on retirements, resignations and leaves of absence. But it could be more than four dozen jobs off the payroll, including three security guards. Two of those are from Douglas High. Most of the losses will be teachers as changes to class-size reduction are made.

Noonan is frustrated with the level of funding Gov. Brian Sandoval has proposed. It will be less than $5,000 per pupil. Nevada spends less than half the national average on each student.

For the upcoming school year, the district was faced with a drop of $4.3 million from the state in per pupil funding, a hit of $441,000 based on declining enrollment, and an increase of $1.4 million for salaries-benefits-operational expenditures. 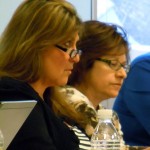 Besides the current cuts, DCSD has trimmed $5.3 million from its ledger in the last four years.

Noonan believes in spreading the financial pain by volunteering to cut her salary by $2,500 – the equivalent of five workdays. But Noonan said she’ll still be working, it’s just a salary cut – not furlough days, so to speak. The CFO and two assistant superintendents are also taking a $2,500 cut, with the expectation they will be compensated with days off.

Some of the eight people who spoke during the April 12 public hearing wondered why the district office was not cut more. It was then pointed out for the nearly 900 employees there are 24 administrators.

Though it won’t be a cost savings per se, one of the assistant superintendents is slated to take on the duties of principal of ASPIRE, the alternative education site that had been housed in a valley elementary school, but will move to a leased site next school year.

Noonan reasons that moving it off-site allows the program to grow, which ideally will provide a revenue stream for the district.

Three public meetings were conducted earlier this month to gain ideas from the community about where cuts should be made. Staff members dominated these meetings, with only a few parents in attendance.

Nancy Hamlett, secretary with special services, told the board Tuesday that as hours are cut for classified staff it could mean also mean not qualifying for benefits. Their contract is different than the teachers who can work part time and receive full benefits.

From the community meetings several ideas were brought forward the board could not take immediate action on. Many involve opening negotiations with the unions, which appears likely to happen.

During the board member comments portion of the meeting it was noted what items they would like to delve into at future meetings in regards to future budgets. Topics include:

The board is slated to vote on the final budget May 18 at Douglas High School.