STATELINE – Say the name Dangberg in the Carson Valley to an old-timer and the reaction is not likely to be favorable.

Even though the family is responsible for creating and naming Minden, putting in much of the irrigation system associated with the Carson River that is used today, and having employed hundreds in the area, their legacy is not all good.

Conrad Buedel spoke about the family and the book he co-authored with Steve “Dink” Achard, one of the last of the Dangberg descendants, during a Soroptimist International South Lake Tahoe lunch at Harrah’s Lake Tahoe on Feb. 8. 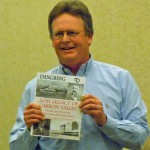 Achard, who is in his 80s, didn’t open the pile of memories that led to the book until 2004. It took the two men seven years to sort through everything before publishing “Lost Legacy of Carson Valley: The Rise and Fall of the H.F. Dangberg Ranching Empire” in 2011.

Much of what he built stands today as a state park whose operation has been turned over to a nonprofit because of Nevada’s budget woes.

The barn built in the 1870s remains. Buedel says the wood dowels connecting the beams have helped preserve the structure.

“The stone cellar is still there. They bought the stones from the prison,” Buedel said.

Dangberg became one of the first in Nevada to grow alfalfa and to later raise sheep. The diversification of business interests helped the family accrue a good deal of wealth – in cash and land.

Dangberg and his wife, Maggie (whose brother created the Ferris wheel), had six children.

It was Fred Jr. who wanted to change the focus of the company, selling off some of the land for development purposes. He also wanted to create a town even though Gardnerville already existed.

First the name Halle was proposed. This is the town Dangberg Sr. had been born in. With the V&T Railway agreeing to have a terminal in the new town, officials were afraid people would think they would pronounce Halle, hell. So, Minden became the name – after the county seat of Halle.

Fred Jr. was able to get the railway to have a depot because he was in the Nevada state Senate and worked out a deal.

Buedel said such shenanigans today would likely land a lawmaker in jail.

By the 1920s the Dangberg company needed to borrow money and sell bonds. The issuance of $750,00 bonds was secured by all of the family’s land holdings. The stock market crashed. More money was borrowed.

Fred Jr., as relayed by Buedel, is making bad decisions. During a poker game with a $50 pot he offers up the family’s 160 acres at Marla Bay. There goes that lakefront property.

By now Fred Jr. is stealing money from the company. He’s feuding with his brothers who eventually sue him for the money.

Members of the family who had never had to work have to find employment. Eventually, the ranch and business change hands several times.

The state takes possession in 2004 with $2 million from the Question 1 Conservation and Resource Protection dollars.