Lake Tahoe News resurrected an interview conducted with Brooks Park in 1992 when he was 79. He quietly filled the role of family patriarch and owned Park Cattle Company, now known as Edgewood Companies. Brooks died in 2000. At the request of family members, this interview was not published until now. Members of the family were recently called, with most declining an interview.

Some may be familiar with Edgewood Tahoe Golf Course and others may be aware Edgewood Companies has plans to begin construction a five-star hotel, Edgewood Lodge, near the clubhouse at the golf course.

In 1992, when Brooks Park was 79, he lived life pretty much as he always had —up at 6am, on the range by 8 and home close to dark. His home in 1992 was across the road (Highway 395, south of Gardnerville) from the house in which he was raised. But he was technically a native Californian.

“All the ladies went to San Francisco and had their babies and then brought them home,” he said, eschewing the thought he was not a native of Nevada. 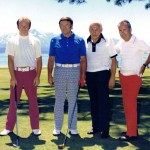 An offspring of a pioneering Nevada family (David Brooks Park and Unity McCue Park were his grandparents), Brooks attended Douglas County High School, St. Ignatius High School in San Francisco and graduated in 1935 from UNR where he was a member of ATO fraternity. His son was an ATO at UNR, as was his grandson. The tradition continues today.

He married Jeanne Cardinal, a Gardnerville native and a descendant of the Dangberg family, in 1936; together they had three children — Bruce, Kay and Jeanne.

Although he said his grandfather, David, died before he was born, David evidently had the entrepreneurial spirit reflected in his descendents. With the purchase of 571 acres of pastureland at Lake Tahoe in 1896, the Parks became Tahoe property owners.

“My grandfather wanted to graze cattle,” Brooks said simply. Except for a small parcel sold to Harrah’s and a few acres described by Brooks as “a little piece of beach frontage sticking out there” given to the 4-H Club, the land remains intact today.

“As for me, I haven’t ventured too far from home,” he said, launching into stories of Tahoe, Friday’s Station and Edgewood.

He said the property in the old days was always called Friday’s Station, but he was unable to recall when and why it was changed to Edgewood. He clearly remembered the early days and his time at Friday’s Station when he was a boy. 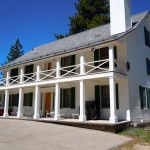 Friday's Station -- family members use it on occasion. Photo/Kathryn Reed

“My grandfather and grandmother operated Friday’s as a kind of a way station and they kept a butcher shop for wagon travelers (1918-20). They operated it in the summer and closed it in the winter,” Brooks said.

He said the house, sitting today where it’s always been, in the shade of huge pines on a grassy knoll on the corner of Highway 50 and Lake Parkway at Stateline, across the street from Edgewood Tahoe Golf Course was constructed sometime prior to 1864.

“Just prior to the Pony Express era,” he said.

His first recollection of Friday’s was when he was 6-years-old.

“I remember a large house with a big kitchen, milk rooms and a great big iron stove. There was a wood shed and on the side of the house were water troughs. There were lots of vines and big cottonwoods; everything was big,” he said.

An ice house was located where Harvey’s Casino garage is now and most of the land now home to the Stateline casinos was pastureland.

“My grandfather didn’t see what it could become. He ran a butcher shop and peddled the meat out of a wagon, but primarily, the land he bought in 1896 was for pasture,” Brooks said.

Even though his mother loved Tahoe, his dad hated it. “I can recall dad complaining that he had to work on the ranch all year long to pay the taxes at Friday’s.”

Although it looks like a grand plantation home, according to Brooks, it’s a log house with log rafters. He said the family refurbished the home in the early 1980s and he predicted it would last for years. 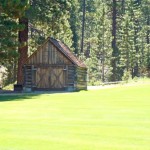 The original blacksmith shop is still on the Stateline property. Photo/Kathryn Reed

As history tells us, Friday’s Station, which is comprised of the main house as well as outbuildings including the old blacksmith shop, on nearly 23 acres, played an important part in the short-lived Pony Express, a mail service crossing the Great Plains, the Rocky Mountains and the High Sierra from St. Joseph, Mo., to Sacramento from April 1860 to October 1861.

Maybe Friday’s role in Nevada history was significant and duly noted, but history was lost on young Brooks.

“When I was 12- to 14-years-old, I stayed up there and irrigated for my dad — we had cattle up there. I didn’t like it. There were no paved roads and no kids to play with. Life was hell. Lake Tahoe was so cold,” he recalled.

“The cattle grazed where the golf course is; about 200 head. We raised our own feed in Carson Valley. We herded the cows over Kingsbury Grade.”

In 1925, there was a box, Brooks remembered, where people and animals had to wade through to disinfect their feet for fear of hoof and mouth disease.