Bears are smart animals. They learn where easy food is, but they can also learn they aren’t wanted in houses, dumpsters or vehicles.

“The alternative is a lead bullet,” Mario Klip, bear biologist with the California Department of Fish and Game, said if bears don’t learn their lesson.

Klip is working with his two Karelian bear dogs in the wild on aversion techniques. He believes a nip in a bear’s butt by one of the trained dogs is better than any type of bullet fired at a bear.

He likes using what he calls a “hard release” of a bear that has been trapped and then is released. His dogs, Villa and Sasha, chase the bear, nipping at it, barking. The idea is to create an experience the bear doesn’t like.

Klip said people need to create a less than welcoming environment for neighborhood bears. The obvious is to not leave trash out for bears to get into. 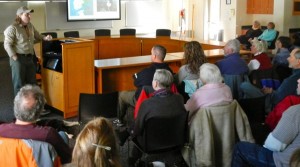 Mario Klip with the California Department of Fish and Game talks Jan. 12 about bears. Photo/LTN

“You need to make sure the animal knows it’s your (house). That you don’t want them. You need to make the bear feel uncomfortable,” Klip said. “You want to limit the undesirable behavior.”

Bears like high caloric foods and ones that smell good. Ice cream, peanut butter and syrup are three of the favorite foods they like to forage for in houses and garbage.

Besides bears’ being a nuisance and distributing garbage about, they take the debris into the woods. This can alter the ecosystem a bit because they are dragging food scraps into the woods instead of eating berries or some other natural food source.

However, in Klip’s studies he has found bears are not solely reliant on garbage, that their scat shows they are eating food that would be normal in their diet.

Nearly 50 people turned out Jan. 12 to hear Klip talk about the work he is doing in Tahoe with bears. The American Association of University Women sponsored the presentation at Lake Tahoe Community College.

Klip is using his research at Tahoe on bear aversion techniques to help him obtain a doctorate from UC Berkeley. While other places in the world are using dogs for bear aversion, he is the only in California doing so.

“There is a global phenomenon that people believe wildlife have intrinsic value. You can’t kill it just because it annoys you,” Klip said.

While the state agency he works for has a rule on the books that a black bear can be killed if it attacks a human, the reality is humans have usually done something to anger the bear. It could be that a bear is in a house, but a person is blocking the exit so the bear takes a swipe. The bear can then be put down. Or it could be a person has food in their tent and a bear goes after it – and inadvertently the person. Again, the bear can pay the ultimate price.

Klip said bears in Lake Tahoe don’t stalk people. However, that’s not true in other states.

“In more remote areas humans are prey,” Klip said, like Alaska. These are places where bears haven’t see humans, and therefore see them as a potentially tasty morsel. “Every bear in California has seen a human.”

The biologist believes coyotes are more dangerous than bears.

While hunting bears caused an outcry when Nevada changed its rules a couple years ago, the state allows 10 bears to be killed, while California’s total is about 2,000, Klip said.  New in California as of Jan. 1 is the ban on using dogs during a hunt to tree a bear.

Previous post : Why should MLK, Presidents Day, Columbus Day and the like be recognized? Next_post : Cardiologist to talk about living at higher elevations