Fifty-four riders from eight countries will be competing this weekend at Sierra-at-Tahoe in the first qualifier for the 2014 U.S. Paralympic snowboarding team.

Today begins a two-day camp for riders, with the race on Sunday.

With the folks associated with next year’s Olympics in Sochi, Russia, deciding less than a year ago to include snowboarding in the Paralympics, riders are scrambling a bit.

“I have personally met several of the athletes. They are inspiring as they have overcome their disabilities, and not only get on the mountain — but can beat about half of us through a race course,” Sierra General Manager John Rice told Lake Tahoe News. 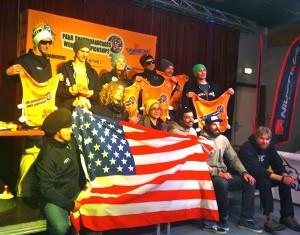 Some of these disabled U.S. athletes and coaches at a World Cup event will be in Tahoe this weekend. Photo/Provided

Sunday’s race will be on the boardercross trail on Smokey. It is tied to the USASA event the same day.

Brent Kuemmerle, who has a prosthetic leg, has been instrumental in getting people with physical disabilities into high-level competition. It doesn’t get higher than the Paralympics.

With the assumption Sochi would not host snowboarders at the Paralympics, Kuemmerle decided it was time to return home to the South Shore and open the Tahoe Adaptive Competition Center. He figured he had until 2018 to have athletes ready for the next Paralympics.

Then Sochi officials changed their mind and Kuemmerle was in limbo. Potential Paralympians are sticking with one of the three established U.S. resorts where they have been training.

“This camp was going to be my coming out party,” Kuemmerle said.

And while it won’t have the splash for TACC it would have had if TACC were home to future Paralympians, Kuemmerle is not giving up on his dream. He is still bringing recognition to his business, to Sierra and Lake Tahoe as a whole.

“Tahoe Adaptive Competition Center is a new organization, but it’s an extension of everything I’ve been doing for close to 15 years,” Kuemmerle told Lake Tahoe News.

He spent the previous two winters coaching a disabled snowboarding team in Winter Park, Colo., home of one of the largest Paralympic training centers in the world. But it’s a mountain known for skiing, not snowboarding.

“At Winter Park you are on the hill five days a week training, then to the recreation center and work on off hill training — weights, swimming, running. That is what I intend to bring to Tahoe,” Kuemmerle said.

He envisions other winter sports like Nordic skiing, downhill and sled hockey being components of TACC. Then he wants to branch out into summer sports.

TACC has a five-member board, volunteers and coaches with Sierra and Heavenly Mountain Resort.

“I believe his heart is in the right place, and once he gets his organization off the ground it will be successful and a great addition to the South Tahoe winter recreation community,” Rice said of Kuemmerle.