While the South Lake Tahoe City Council keeps making decisions about paid parking, the issue won’t go away. And it’s not going away because of a 1987 agreement with Heavenly Mountain Resort that has come to light.

The agreement approved by the City Council at the Dec. 1, 1987, meeting called for the ski resort to implement and enforce a parking permit system on some of the streets leading to the California Lodge, as well as provide snow removal in the permitted parking area.

While Mayor Tom Davis indicated a partial recollection of the agreement, the details of it have not been enforced in the last quarter century. 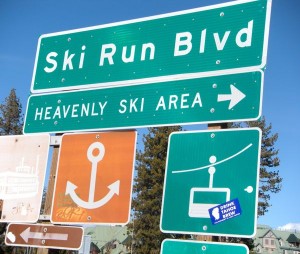 Paid parking on Ski Run Boulevard is in a state of flux. Photo/LTN file

Police Chief Brian Uhler, whose department is responsible for parking, has been talking to Heavenly officials about the 25-year-old deal.

“I’m optimistic we can reach an agreement,” Andrew Strain, head of government affairs for Heavenly, told the council last week.

He told the council the resort has plowed and sanded the streets when the city crews could not do so, that the resort has paid for one-third of the cost of the message board signs on Ski Run Boulevard, $240,000 was spent on a repaving project, and that overflow parking is needed no more than 20 days a season.

All four councilmembers agreed they want the 1987 agreement to be analyzed, revised and an update on what aspects of it will be enforced this winter.

When it came to voting on the parking meter-permit plan it was a 3-1 vote with Davis voting note. He didn’t give a reason for doing so.

Paradise Avenue from Ski Run Boulevard to Wildwood Avenue has been designated a parking meter zone. Free permits will be issued to residents impacted by paid parking areas.

Fees associated with paid parking will come back to the council. It’s possible Paradise Avenue will allow overnight parking – at a cost – because this is currently where some guests of Embassy Vacation Resort park instead of paying the hotel.

• The council collectively voiced its frustration with the Tahoe Transportation District in light of a letter received by Executive Director Carl Hasty. The council expected the loop road discussion to be more in depth and for one meeting to be in council chambers for city residents, which in turn would be televised for more people to see. “I thought it was a dog and pony show,” Councilman Hal Cole said of the presentations he went to. “That is not how you select a $60 million project.” A stern letter will be sent to Hasty saying just how the council feels.

• The council agreed to use a recruiter to find a city attorney. Patrick Enright will be leaving when his contract expires at the end of May.

• A workshop will be scheduled to prioritize capital improvement projects.

• The city will be taking employee and community surveys in the coming weeks, with results available in March.

• A request for proposals to be the concessionaire at Bijou Park, Lakeview Commons and Regan Beach has been released. A business or person may apply for one or all three. The City Council is expected to make a decision in late February or early March.