Retailers are no longer content with Black Friday; instead they are starting the holiday shopping frenzy earlier.

“Last year we lost out on this weekend. Kmarts lost out to all stores that opened early,” explained Melodie Johnson, manager of the South Lake Tahoe store.

In the past Kmart would open at 5am on the Friday after Thanksgiving. Not so anymore.

This year the general merchandise store will be open Thanksgiving Day from 6am to 4pm, then reopen that night at 8 and stay open until 3am Friday. It will be closed for two hours, before reopening at 5am. 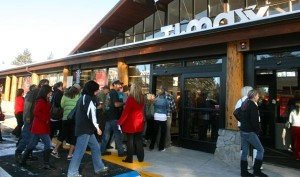 While opening day was a big deal this month for TJ Maxx in South Lake Tahoe, Black Friday will be rather ho-hum. Photo/Tracy Franklin

While Kmart is closed employees will be restocking and changing signs. The different hours will have different specials. For instance, the first set of specials on Thanksgiving Day includes two-for-one shoe sales. The evening specials will be on clothing, jewelry and Craftsman products. Door busters start Friday at 5am.

Johnson told Lake Tahoe News the goal is to keep people in Tahoe instead of having them go off the hill for specials like they did last year.

TJ Maxx, which opened in South Lake Tahoe on Nov. 11, won’t be any competition for Kmart because it will be closed Thanksgiving Day.

A salesperson told Lake Tahoe News, “We have no specials on Black Friday because our items are discounted all the time.”

But just in case Black Friday shoppers want to start early, the store will be open at 7am and won’t close until 10pm.

Apricot Lane in the Heavenly Village “isn’t doing anything crazy for Black Friday,” a saleswoman said, but to capture holiday shoppers a three-day sale begins Wednesday. And the store is open Thanksgiving Day.

Targets and Wal-Marts everywhere, including the Carson Valley, are opening earlier on Thanksgiving than last year – 9pm for the former, 8pm for the latter.

The National Retail Federation predicts consumers to spend $749.51 on gifts and other holiday items this season. A year ago, $740.57 was spent per person. This would mean holiday sales for 2012 would total $586.1 billion – an increase of 4 percent for 2011.

This does not include online purchases. Forrester Research believes online sales will be up 15 percent over 2011 levels to total $68.4 billion. Cyber Monday – the Monday after Thanksgiving – is usually the big day for online retailers.