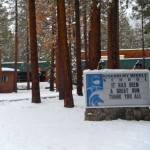 When Kingsbury Middle School closed two years ago no one thought it would re-open. That thinking was solidified with the approval of Douglas County School District’s facilities master plan.

The plan that was OK’d by the board in April calls for getting rid of the Stateline parcel or at a minimum lease the property.

Declining enrollment at Lake Tahoe forced the district to go from three schools at the lake to two in fall 2008. For a variety of reasons KMS was picked as the school to close.

“The idea at this time is maybe to lease the building,” Soderman said. “It serves us to have somebody in it. It would be good for a senior center. It has a cooking facility, classrooms, all the computer wiring, a gym for activities. It could be an expanded library because there is plenty of space.”

If a lease were to occur, it’s most likely would be with the county and not a private company or individual. This is because there are state regulations about who could lease such an entity.

A land swap and selling the property are other alternatives. If a swap were to occur, it would most likely be with the county. There is land near Zephyr Cove Elementary and Whittell High schools the district might be interested in acquiring, Soderman said.

A couple real estate agents made inquiries in April about the KMS property.

Nevada law requires the district go through a well mapped-out process in order to sell school property. This includes getting multiple appraisals, seeking bids and being completely transparent. The district could turn down offers for any reason.

DCSD Chief Financial Officer Holly Luna would not put a monetary value on the property because an appraisal has not been done in years. Any money collected from the sale would be deposited in the capital improvement account. It cannot go toward salaries – just capital projects.

All of the projects approved in the 2008 bond will not be covered with those dollars. The idea is selling Kingsbury Middle School would supplement that pot of cash.

“It’s not the building that is worth anything. It’s a prime piece of property at Lake Tahoe,” Luna said.

Soderman said, “I’m guessing just the coverage is worth a fortune.”

With the Tahoe Regional Planning Agency dictating the percentage of a parcel that can be covered, coverage is a huge issue in Lake Tahoe.

Luna said there is minimal cost to the district with KMS closed – keeping the thermostat at 50 degrees, plowing in the winter and having a phone going so it connects to the fire line.

With the second gym opening at Whittell High School this spring, it means the gym at KMS has been padlocked.

Soderman says the district has saved about $1 million a year by closing the Kingsbury Middle School.