That was the essence of the first community input session set at Whittell High School on Thursday night and facilitated by Douglas County School District Superintendent Lisa Noonan, who was collecting ideas on who to woo for possible suitors to buy the 36,000-square-foot school that sits on 10 acres of pristine lake ridge property above Lake Village. 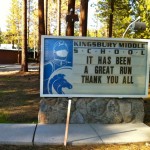 Noonan will host the second meeting at 6pm on June 1 at Douglas High School’s Media Center at 1670 Highway 88 in Minden.

“My hope is by the end of the summer to get our ducks in a row,” Noonan said. “This is literally just step 1.”

The school – which provided a noisy source of controversy when the school district closed it and gave away two grades to Zephyr Cove Elementary and the high school — comes with its advantages and disadvantages for the possible buyer. The latter – it needs work, including a new roof that could run $460,000 according to early estimates. The former — it has a cafeteria, full-sized gym, locker room and its BMPs – the Tahoe Regional Planning Agency’s mandatory erosion control measures. The land use coverage may also be worth a lot, which opens the door for a buyer razing the building and capitalizing on eliminating the coverage.

“The land is probably what is more valuable – even in this market and economic downturn,” school district Chief Financial Officer Holly Luna wrote Lake Tahoe News before the meeting.

Parent Andy Dauscher asked about getting a tally on all necessary repairs and a solid figure on maintenance costs. It costs the school district money to plow the road, keep a phone line open and run limited utilities.

When the district posed the question of closing the school, the estimates were as high as $1 million a year the school district would be saving. Noonan couldn’t confirm the figure, but instead focused on what “it’s costing” while deteriorating.

“It’s a big deal when you sell a school in a small community,” she said. “My hope is by listening to the community that we’ll know this is what they want for the community.”

Thursday’s input session brought out only a handful of people to bounce around ideas to which Noonan jotted down notes. This was a stark contrast from the hundreds who gathered before the school closed. She addressed the 15 attendees of the booster club who met before the session and shared their suggestions as well. Much of their input focused on recreation. There’s a huge need for large spaces and a place where teams can congregate and practice.

At the session, parent Greg Felton noted how many teams are forced to travel to the Carson Valley for practices, taking time away from homework and other activities – not to mention the safety hazard with the treacherous winter driving conditions over a mountain pass.

Felton pressed Noonan on whether selling the school may be the wisest choice for now and insisted on knowing whether the school board is absolutely set on the direction to sell the school.

“It seems like the wrong time,” he said, referring back to the superintendent’s comments on how bad the current economy is.

Noonan responded that she believes the school sale was part of the known equation when the board agreed to close it in 2008. She agreed to confirm the direction and look into other unknowns as in the zoning, whether any donor-type deed restriction exists and getting appraisals into place. No appraisal is on the table. And Noonan told Lake Tahoe News no serious parties have expressed interest in buying the property.

Western Nevada Community College was approached when Carol Lark was at the helm, but it has left the picture with its own budget problems to contend with. It may close two of its facilities.

Still, Nevada’s budget woes have not spoiled Noonan on the idea of pursuing interest from other colleges.

“I think the university option is a viable one,” she said. If not directly run by the higher education entity, perhaps an alumni group would like to form a Stanford Sierra Camp-type setting on the Nevada side of Lake Tahoe, she mentioned.

Other ideas abound – including a land, facility or title swap with Douglas County.

Before the sale may occur in a depressed real estate market, Noonan noted that the school could be used under some type of lease agreement, but the long-term goal is to sell.

“Our current 10-year projection doesn’t show a bounce back (of school enrollment),” she said.