There might be no money for state parks, but money isn’t all they need.

That is the basic message in a new study released Friday by California’s largest parks advocacy group.

The “Vision for Excellence” report by the nonprofit California State Parks Foundation is an acknowledgment that no financial salvation is at hand for the embattled parks, and that a new mission for an austere future may be needed. 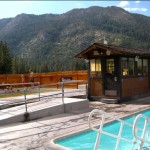 Grover Hot Springs in Markleeville has had its hours reduced. Photo/LTN file

Gov. Jerry Brown has ordered the State Parks Department to cut $22 million from its operating budget over the next two years. Within two weeks, the department is expected to release a list of properties to close in the 278-park system to meet the cost-cutting target.

They would become the first total closures in the 150-year history of the state park system.

In this context, it might seem surprising that the new report offers few financial fixes. But in November, the foundation was unsuccessful in that arena when voters failed to approve Proposition 21, which would have imposed an $18 annual fee on vehicle registrations to fund park operations.

Previous post : Friends turn emails into food blog for the masses Next_post : Update from Squaw’s CEO about the mountain