MEYERS – While it probably would have been hard to get lost, it was nice to have a guide get us beyond the various off-shoot trails and direct us how best to make a loop through the woods so we’d find our vehicle before dark.

That’s the thing about locals – they know where unmarked trails go.

Entering the forest off Pinewood Drive we pass a gate and walk up a short ways on asphalt. A South Tahoe Public Utility District water tank is on the right. From there, the trail is all dirt – well, except for the pockets of snow. 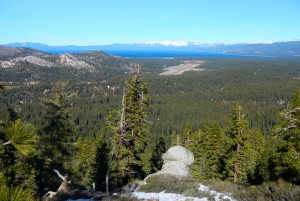 We make this excursion on the second Sunday of December when there is more dirt than snow on the trail. The same conditions would not exist today. If someone else had been out there first I might go on snowshoes, but there were no blue markers on trees to help guide the way in snow.

Kim leaves work for a spell to show us one of her favorite places to take her dogs out for a romp. For her, it’s a short walk from her house in Meyers. We had to drive all the way from South Lake Tahoe. It was well worth it.

It’s one of those treks that isn’t super long, but has incredible views.

Cowboy Rock is the end point – but we stop just shy of there. My stamina was lacking after coming off a nasty cold and the air temperature was less than pleasant when our bodies stopped moving.

While Mount Tallac is stunning from any angle, seeing the Angora burn area below it is still heart wrenching 5½ years later. This spot is where some in the neighborhood watched the fire rage that June day in 2007. Today, the scar on the land is a reminder of what happens when campfires – illegal or not – are not fully extinguished.

Despite this reminder of one of Tahoe’s tragic events, beauty is everywhere. Sugar pines are interspersed with other conifers.

No longer is the forest as dense as it was earlier in the summer. U.S. Forest Service crews have been out thinning this area. Future burn piles dot the landscape at the start of the trail.

Various routes abound. It’s easy to hook up with Mr. Toad’s or go over to Oneidas from here.

We turn around after a quick break on top of some granite boulders. There we have views of Lake Tahoe Airport with Lake Tahoe in the background.

Sue and I count this as a teaser excursion, as we look forward to discovering more about this network of trails after the snow melts. 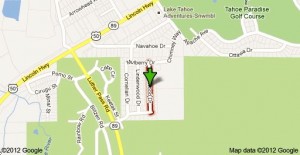 To the left is a map of where Pinewood Drive is in Meyers. For the most part, just go straight up, veering a bit to the right to get to where the excellent views are and then to the top of Cowboy Rock.