If another Angora Fire happened today, would there be enough resources available to fight it?

The simple answer is no.

“There would be no number of firefighters that we could employ that would be able to fight that kind of disaster,” said Chief Brian Uhler of the South Lake Tahoe Fire Department.

Representatives from other fire districts in the basin seem to concur.

“That fire was conditions-based; it wouldn’t have mattered if we had helis waiting at the airport,” said Kit Bailey, forest fire chief for the USFS Lake Tahoe Basin Management Unit.

The helicopters that would have been used to attack the fire from the front were grounded. Crews were left to battle the blaze on foot and in engines with winds gusting up to 50 miles per hour. The helicopters eventually made it up, but by then the fire had gone from manageable to massive. 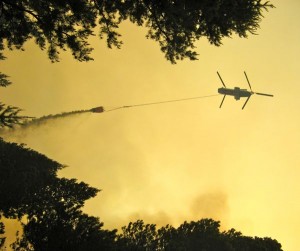 Helicopters from outside the area fight the Angora Fire. Photos/Lake Valley Fire

In the end, 1,900 firefighters, and 12 helicopters fought the Angora Fire, not to mention numerous engines, dozers, water tenders and air tankers. They came from all over the Western United States. And if it happened today, they would come again.

In disaster situations such as the Angora Fire, fire departments rely on mutual aid agreements with other fire districts. They essentially agree to help each other in times of need. In fact, Gareth Harris, fire chief for the Lake Valley Fire Protection District, said those agreements have been improved and streamlined since Angora, and response time from cooperating districts would be even faster today.

An automatic aid agreement within the basin ensures that every firefighter in the Lake Tahoe Basin will be available to help for the first 24 hours. This gives units from farther away time to arrive with no lag in initial response.

However, the help received from neighboring districts may not be what it once was. Recent budget cuts have taken their toll on fire departments. South Shore crews including LVFPD, SLTFD and the LTBMU have managed to keep the same number of firefighters on staff, offsetting the cutbacks elsewhere. While SLTFD did lose four upper management employees, they managed to retain the number of firefighters. 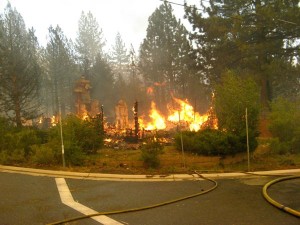 Lines of fire hoses can't extinguish each house on fire.

“The Forest Service hasn’t seen any reduction in capability at the local level or the regional level,” Bailey said. “I think we’re as well positioned as we can be, not just on the federal level, but on the local level, too.”

Other fire districts were not so lucky.

Three years ago, the North Lake Tahoe Fire Protection District had three 20-person wildland fire crews. That number is now cut in half. CalFire has had to reduce its number of seasonal firefighters from up to 3,000 in previous years to 1,700.

But Janet Upton, deputy director of CalFire, told Lake Tahoe News she believes this reduction will not impact their effectiveness.

Upton said the staff reductions are offset by improvements in technology since 2007. The 21 administrative units across the state can now track detailed weather patterns and predict those “perfect storms” like the one during the Angora Fire up to 72 hours in advance. The department can then shuffle resources from an area with low fire danger, to higher risk locations. They can cancel days off and have crews work overtime

“If the threat is there, we are staffed to meet it,” Upton said.

She does admit, however, that staff reductions will likely impact their initial attack on a fire. Transporting crews from the other side of the state takes time, and relying on mutual aid agreements means waiting on crews from other districts.

In the event of another major fire, some districts in the basin may have to rely on improved aid agreements combined with developments in fire and weather technology to combat reductions in manpower caused by budget woes. The South Shore, however, having retained its firefighting forces, can bank on an equal, if not improved ability to launch an attack on the next Angora Fire.