Memories of the Angora Fire and its aftermath can renew feelings of pain, despair and loss. There are some of us who, with each anniversary, take time to reflect on the events of that day. Some look at the rebuilt homes, neighbors settled in, and new landscape with gratitude, but long for those special things that can never be replaced; a gift from a child, a family portrait, a treasured knick-knack. Each year, as we meditate or pray in gratitude, we also reflect with reverence.

In the five years since the fire, some of us feel “healed”. With the exception of physical scars in the surrounding forests, we look very healthy. Some of the burned out lots have been replaced with neighborhood gardens or places of meditation created by property owners. Beautiful homes have been rebuilt a little larger than before and in record time (80 percent were rebuilt one and a half years after the fire – unprecedented in the state of California). Empty lots were sold to new families who wanted to build a new home in this area. There are aspen groves along creeks once hidden in a thick forest that are now visible. Wildlife has returned with even certain species not seen for a while. And, the forest, thanks to many, is being replanted with not only the Jeffery pine, but also, cedar, and sugar pine so that over the course of many, many years the forest will be more diversified.

I think back to a few weeks before the fire, the Tahoe Resource Conservation District had an outdoor community workshop on Boulder Mountain as an educational opportunity for the surrounding area to learn about best management practices, invasive weeds, and even defensible space. Kim Carr, then working for EDAW (a private environmental consulting firm), put together a poster showing the integration of BMPs, defensible space and water conservation. Attendees asked about their decks, pine needles, BMPs, and a host of other concerns and issues.

Another tragic irony is that just two weeks before the fire, I walked along Mt. Shasta with Jessica Mahnken, then with Lake Valley Fire Protection District, distributing “Living with Fire” information. It was painfully incongruent that this effort and the enthusiasm we shared in reducing the risk of wildland fire be followed so closely by the events of the Angora Fire.

Like any catastrophic event, I think we all remember where we were in those early moments when the fire began. It was almost disbelief as the fire grew so rapidly. The response from emergency services was nothing less than heroic. To evacuate homeowners, visitors, families, animals and organize an attack on the fire, to manage resources, and to do it without loss of life was a remarkable accomplishment. I was in the midst of true professionals who knew how to create, control and command a multi-jurisdictional arena. The fire was on county land with Lake Valley Fire Protection District first on the scene, and contingency crews rapidly joining in from the city, state, federal, and outside districts and metropolitan areas. It was a war zone managed by professionals knowing exactly when, how and with what to proceed as components and elements constantly shifted. I will never forget being inside that circle as it developed into a sophisticated command center and communications operations. Everyone had a job and nothing was done outside of the information organizational chart. These professionals worked nonstop, slept little, ate only after hours of duty, were responsive, dedicated and put their lives on the front line to save people, homes, property, an industrial area, the high school and natural resources. I cannot provide praise enough for our emergency services personnel for what proved to be life saving measures for our community.

The community also deserves great praise. During the fire, what was created seemingly from chaos, was a community response to serve those who were immediately displaced and in shock. It was a beautiful collection of concerned service providers and city staff who immediately coordinated a shelter with food, supplies and support. The Lake Tahoe South Shore Chamber of Commerce jumped into action to set up a fund, nonprofits joined together to provide services and the South Shore community came to action to help one another. It was a truly spiritual moment in the history of our community. I have never experienced such gracious giving as when we tooled up to assist our neighbors. And, I will never forget it. This is what I know to be the real caring capacity of our community. That is a threshold that will never need redefining.

And, after the fire, when the smoke settled, what next? What happened was nothing less than historic. Never before have state, federal, county and private forces come together in such a way that allowed an immediate solution to the massive cleanup of the toxic remains of the Angora Fire. Ravaged homes, vehicles and furnishings now potentially impacted a watershed that could have devastated Lake Tahoe. Because the state and county elected officials and departments worked together so closely on an immediate solution to clean up the sites and have it paid through the Office of Emergency Services and insurance companies, and by fast-tracking building plans and waiving fees, homeowners could settle with their insurance companies quickly and begin the rebuilding process. Recovery from the Angora Fire was an incredible display of possibilities with government facilitating a solution and then getting out of the way. The Angora Protocols, as they have been coined, were so proactive and responsive that other communities affected by devastating wildfires have had trouble organizing components of its success. 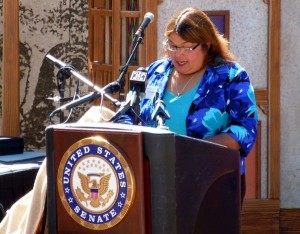 And, in the last five years, county, state and federal crews have worked tirelessly to minimize the impacts of watershed damage by clearing devastated vegetation, replanting, and building stream restoration and erosion control projects to reduce the sediment flow into the lake. These efforts combined with best management practices and a new consciousness in our community will surely improve our chances to prevent and withstand another event such as the Angora Fire.

What I take away from this event in these five years is how immense our love is in this community, for each other and for our environment. If indeed the Chinese symbol for crisis includes both danger and opportunity, I contend that our community grew together, faced danger and built opportunity from the ashes. I am incredibly honored to be your representative.

Norma Santiago is on the El Dorado County Board of Supervisors representing the Lake Tahoe Basin.

Previous post : Defensible space can save a house during a fire Next_post : Cutbacks would challenge emergency response for the next Angora