With summer having arrived unusually early in Lake Tahoe, people are at the beaches. And these people are hungry. But there is no vendor at El Dorado or Regan beaches because the city again can’t get its act together. 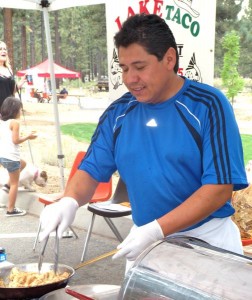 Danny Chavez will know May 18 if he will be the concessionaire for Lakeview Commons and Regan Beach. Photo/LTN file

The number of irregular bids is beginning to mount – from the contractor for Lakeview Commons to the bear box issue that was resolved earlier this month to the current concessionaire for the city owned beaches.

City Attorney Patrick Enright wanted to bring the bid back to the council June 5, but the electeds said no way, this needs to be resolved immediately. Staff has until 3pm Friday to get all of its ducks in a row because that is when a special council meeting has been set to deal with just this issue. (Mayor Claire Fortier will be absent because her son is graduating from college.)

Enright on May 15 told the council he heard from the county Health Department late Monday with issues involving the applicant who staff had recommended the bid be awarded to. He also has issues with the bid saying the venues will be open five days a week, when in fact the city wants them open seven days.

Cronyism was the charge leveled against staff’s recommendation to award the contract to Danny Chavez of Lake Taco Catering. While that word was used, the people who spoke at Tuesday’s council meeting presented no evidence of cronyism.

Ryan Payne, who owns Energy Drink Outlet in South Lake Tahoe, was the first public speaker. He said on Monday he filed a formal protest against Lake Taco getting the concessionaire because according to a survey he took “the community is not behind this”. He questioned how the contract is different than what is in the proposal – saying cronyism was at play.

Jeff Sparrow of Lake Tahoe Catering Company, who was one of the five bidders for the concessionaire, said he believes the process is whom you know, not what you know.

• Completeness and comprehensiveness of proposal – pass/fail.

Sherer said Chavez with Lake Taco was the No. 1 choice of the panel.

“He knows what it takes to provide for a lot of people,” Sherer told the council. “We feel he can increase gross revenue more than all the other respondents. Ultimately he will provide more revenue for the city.”

Sanchez has been operating the Regan Beach concessionaire for a handful of years. This will be the first year for Lakeview Commons to have a vendor now that the boathouse is complete.

Sherer said he did go over financials with Chavez – which is common in a bid like this when the lowest responsible bidder is not the main, overriding criterion.

While Chavez’s bid says he will work five days a week, he told the council that was a typo. He said seven days is what it should say with no changes to any other numbers.

Chavez countered Payne’s allegations that he was irresponsible and left things outside that shouldn’t be by saying he was remodeling the Regan Beach facility so things had to be placed outside while work was done inside.

Others applying for the concessionaire were Crepes on the Lake and Commons Cafe, Beach Hut Deli, and Bijou Snack Shack.

The contract is slated to be for five years, with the city receiving 10 percent of gross sales in the first year, 11 percent in year two and 12 percent for the remaining years.

• Councilman Tom Davis reported Go Ape would not be building a ropes course this summer at Lake Tahoe Airport. He said the FAA is the hang up, with the hopes those issues will be resolved in the coming weeks.

• The city will be looking for a commercial real estate agent to help get rid of properties once owned by the Redevelopment Agency that are now under the purview of the successor agency since the state dissolved all redevelopment agencies.

• Signs will be put up at Lakeview Commons prohibiting people from using the built environment for use by snowboarders and skateboarders – and others – who want to do tricks and not just pass through the area.

• On a 3-2 vote, with Councilwoman Angela Swanson and Fortier voting no, the majority wants owners of historic signs to be able appeal any Planning Commission decision to the council.

• Swanson and Councilman Bruce Grego were appointed to an ad hoc committed to deal with the Lakeview Commons lease with El Dorado County.