Monkeying around is being encouraged.

“I went through a Go Ape course in England. We went through it twice because we liked it so much,” Sherry Miller, who runs Lake Tahoe Airport, said. “It’s a high-rope course. It’s a fantastic outdoor activity for everybody.”

Such a course, which includes ziplines, is expected to open at the South Lake Tahoe airport next year. The city’s Airport Commission approved the idea at its Nov. 3 meeting. The City Council is expected to approve the contract at its Nov. 15 meeting. 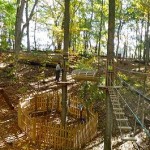 A treetop adventure park is expected to open at Lake Tahoe Airport in 2012. Photo/Go Ape

“Our first interest is to create an opportunity for our guests to enjoy something unique, something that supports and symbolizes the natural environment here,” City Manager Tony O’Rourke told Lake Tahoe News.

Officials from the Maryland-based company were not available for comment late Thursday. While they were not at the meeting this week, representatives have been at previous Airport Commission meetings touting how they could transform several acres of the airport into an eco-adventure for locals and tourists.

The tentative 15-year agreement has Go Ape leasing 12 acres of the airport starting near the tower. (That would mark the south end of the course.) The contract start date would be Nov. 15 if council approves it. Rent would likely start being collected April 1, 2012, in the amount of $2,000 a month, going up based on the Consumer Price Index. The city will also be paid a part of the gross revenues, with the plan calling for 2 percent in year one and maxing out at 11 percent in year six.

Estimates are the city could make more than $100,000 a year off the adventure by the fifth year.

It would probably be open six to seven months, and not in the winter to begin with.

It takes six weeks to set up the course. They are considered semi-permanent, so they can be taken down if need be. Trees are protected so their growth is not stunted.

Platforms will be built into the trees. These launch pads are where people jump from or start their trek along wobbly ropes.

Miller was almost giddy describing the fun she has had on one of Go Ape’s courses in the U.K. Wearing a harness and strapped to a cable, people are not going to fall no matter how sweaty their palms get.

Four to six sections are in each course. It’s expected one course will be built in South Lake Tahoe. Each of Go Ape’s courses occupies 6 to 9 acres.

With the company limiting the number of people who can use the course at any given time, it’s not expected to add tremendously to traffic issues on Highway 50. At its other facilities, reservations are the norm.

Parking is not solidified. It will likely either be near the non-functioning control tower or in the main lot of the airport.

While Go Ape cannot fell any trees without the city’s permission, this area is slated to be thinned. Miller said the Go Ape officials will be notified which trees are likely to removed so as its design team creates the course, they know which trees will be standing when it comes time to build the apparatus.

The airport tower, which has not been used in years by the FAA, could become Go Ape’s offices and storage site.

The Federal Aviation Administration still has equipment there, so that would need to be removed. Plus, the FAA must sign off on the idea once the council gives its blessing.

“Typically the FAA doesn’t like park-type things on airport property, but this is land that cannot be used by aircraft,” Miller told Lake Tahoe News. “In our land use plans this is an approved use.”

Miller said Tahoe Regional Planning Agency staff has been part of discussions and is working with everyone to make this become a reality.

“We can’t wait until they get here. We’re fighting over who is the first one to go on course,” Miller said.