When I first saw the title of the book I thought there should be an S at the end Harvey. After reading “Bombing Harvey” I understood more fully how the man responsible for the explosive device going off at the Stateline casino in 1980 had a vendetta against casino owner Harvey Gross, so the title was appropriate. 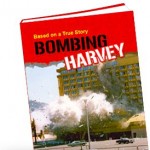 While I had already read much that is included in the book by John Birges Jr. and Nina J. Arnold, I chose to read it because of the author. Birges was part of the bombing. It was his father John Birges Sr. – or Big John – who came up with the plan.

I was in high school in the Bay Area when the bombing took place. Honestly, I don’t have any memory of the news coverage from then. I can only imagine it was extensive.

However, I have read plenty about it in the years since then, especially at various significant anniversary dates.

“Bombing Harvey” is an easy to read 205-page paperback that came out in 2010. For anyone who lived through the incident, it’s doubtful anything new would be gleaned from reading the book. But for those who weren’t here or aren’t old enough to remember the event, it would probably be worth reading.

It delves into the family life of the Birges. Big John had his two sons and girlfriend working on various aspects of the plot.

Some of the names of people in the book will be familiar to locals. For instance, Ron Pierini who is now sheriff of Douglas County was the captain of the Lake Tahoe substation at the time.

While Harvey Gross is no longer alive, plenty of his descendants reside on the South Shore. A bit of the book talks about his anxiety in knowing a 1,000-pound bomb was sitting inside his hotel-casino. One can only wonder with a corporation now owning the casino, if the same concerns for human life would be exhibited.