While this will be the first full season Kirkwood Mountain Resort has operated under the Vail Resorts flagship, it has been a mainstay in the Tahoe area for 40 years. Also celebrating its 40th year is the second newest Vail acquisition – Northstar.

But it’s Squaw Valley, Alpine Meadows and Sugar Bowl that are investing the most amount of money in infrastructure for the 2012-13 ski season. 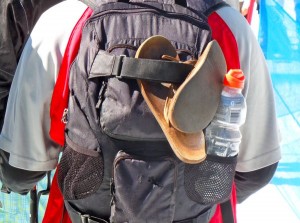 Ski resort operators are doing snow dances in hopes no one comes to the slopes this year with open-toed footwear. Photo/LTN file

And that season has already begun. Squaw was open for a day in October as a fundraiser, while Boreal remains open on weekends.

Snowmaking guns at Northstar and Heavenly Mountain Resort were fired up in October.

All resorts are hoping that for this season the manmade stuff sets a base and gets the season going; unlike last year when snowmaking helped save the season. But even an epic, record snowfall winter like 2010-11 is not all that welcome because it makes getting to the resorts difficult and digging out challenging.

While forecasters look west, analyze computer models and study historical data to predict what the weather will be like this winter for the greater Lake Tahoe area, only time will reveal what this winter will be like. But if one is to look at local lore, most years when significant snowfall has dropped on Heavenly (like last month), that winter is above average when it comes to white stuff. Again, time will tell.

Here are few highlights at some Tahoe area resorts for this season:

Big Blue Express, a high-speed six-pack chairlift, replaces High Camp chairlift. It starts where the base of the High Camp lift was, but goes farther – to the top of the ridge so it will be easier to access Shirley Lake, Solitude and Granite Chief chairlifts.

The Links double chairlift is out and in its place is Mountain Meadow, a triple chair.

The Park Pulley telecord, touted as a modern day tow lift, is designed to provide easy access to the Belmont terrain park and to eliminate traversing across the mountaintop meadow.

The resort is trying to catch up with others when it comes to snowmaking capabilities by putting in $3 million worth of upgrades. Some of that cash was also spent on groomers.

A Burton Learn to Ride program will be initiated.

Olympic Plaza Bar has been completely remodeled to the tune of $300,000.

New shops are also expected to open in the village.

While Squaw and Alpine have one owner as of fall 2011, the bulk of the money is being spent at the 1960 Winter Olympics venue. Combined, about $24 million in capital improvements have been made for this season at the two areas. This year’s investment follows the $15 million in base area and on-mountain improvements from last winter.

Called the Renaissance, the plan is to invest $70 million at Squaw and Alpine by winter 2015-16.

With a vast improvement to snowmaking efficiency at Alpine, a mile-long terrain park will be built. Snow Park Technologies will be tasked with building Tahoe’s longest park.

Alpine will also operate a Burton Learn to Ride center.

The ticket office has been reconfigured with seven windows, including one to comply with the Americans with Disabilities Act.

Additional glading was completed in the Promised Land ski pod over the summer.

Lack of snow last year prevented the launch of snowcat and backcountry tours on Sawtooth Ridge, so that is back on the agenda this season.

A Burton Riglet Park that introduces snowboarding to ages 3-6, like what Sierra-at-Tahoe started last season, will open at Northstar.

Sean White continues to call Northstar his training grounds. He will help design a 22-foot superpipe.

Tavern 6330’ opens in the Village at Northstar.

Dec. 22 is when the resort will celebrate its 40th birthday. White is expected to be on hand for the party.

Sugar Bowl will be operating the country’s largest cross country ski area – Royal Gorge. The resorts are already linked by an “interconnect” trail that allows skiers to ski between the two. Plans are in the works to improve that route. Sugar Bowl also has plans to invest $500,000 in Royal Gorge this season.

The resort is partnering with Sierra Nevada Dog Drivers to return a sled dog race to the region after a 17-year hiatus. The Jack London Commemorative Sierra Sled Dog Derby will be at Royal Gorge on March 2-3.

In 2013, an academy that will train young skiers and snowboarders for high-level competition will be complete. This is part of the $50 million in improvements the resort has made in the last few years.

Rental gear is free for people participating in group lessons with a daily lift ticket.

Returning is the Rahlves Banzai Tour finale on March 16-17.

Major capital improvements aren’t coming this season. Vail officials have not released a game plan or time line for upgrading their newest resort.

New this season is a four-day backcountry camp offered through Expedition: Kirkwood on Feb. 15-18.

Unbuckle at Tamarack, the après ski party, is being touted as better than before. The Gunbarrel Grill is being called an “on-mountain man cave”.

The resort will host the U.S. Freestyle Championships on March 29-31.

Instructors in Heavenly’s Peak Performance Academy will work with skiers and snowboarders in an all-mountain clinic that will feature video analysis, high-end riding and off-piste tactics, while addressing personal goals. The two three-day clinics are Jan. 25-27 and Feb. 8-10 and one five-day clinic is March 4-8.

Sierra-at-Tahoe this season will offer snowcat tours that will take skilled skiers and riders to the top of Huckleberry Canyon to access backcountry terrain. The Sierra Snowcat is also available for private tours by groups of five or more.

Sierra-at-Tahoe season passholders have the added benefit of skiing or riding for free at multiple mountains around the country. Unlimited season passes include 10 days at both Mountain High in Southern California and Stevens Pass Mountain Resort near Seattle. All Sierra season passholders can ski or ride Monarch Mountain in south-central Colorado for three days.