Deciding to disband redevelopment agencies throughout California has proved to be more cumbersome than many people anticipated and has necessitated the revision of laws and new ones created to help local governments comply with what Sacramento wants.

It has left South Lake Tahoe and El Dorado County battling over $1.5 million. It’s Nancy Kerry as a member of the successor agency and Joe Harn, the county auditor who is supposed to oversee all the financial dealings with the agency, who are going after each other.

A meeting Oct. 11 of the South Tahoe Redevelopment Successor Agency board was heated and contentious at times. This is the board created after the state said redevelopment agencies must go away. 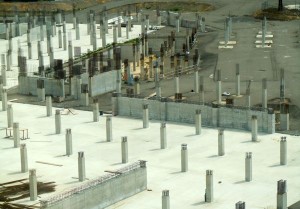 A lower assessed value on properties at the South Tahoe hole means a loss of $1.5 million. Photo/LTN

The battle over the nearly $1.5 million stems from property owners of the rebar and concrete that was supposed to be a hotel-convention center near the state line asked for their parcels to be reassessed. They were. It meant about $1.5 million less in property taxes having to be paid by those property owners.

But the problem is the county already allocated those funds. They went to the Redevelopment Agency before it was dissolved.

On Oct. 1, Harn said he would deduct the $1.5 million from the 2013 property tax disbursement.

On Oct. 9, city staff on behalf of the successor agency wrote a letter objecting to Harn’s actions.

Kerry, at the Oct. 11 meeting, said she is not disputing the money is owed, but questions who gets paid first. She believes the money should be considered a debt the successor agency would deal with. Harn says that is wrong, that the money is a tax roll adjustment.

Harn said it’s his job to make the correction without regard to who is affected by the action.

Kerry wants it as a debt because then the obligation to pay it back is secondary to the bondholders.

“It’s crippling to take all of it at once. The successor agency is not questioning that the money is owed,” Cole said.

In this post-redevelopment era, is it the county treasurer-tax collector who would determine if a payment plan could be structured. If it’s not, then where the $1.5 million comes from remains unknown.

It was resolved at Thursday’s meeting that the city on behalf of the successor agency would see if the county would work on a payment plan for the $1.5 million and that a meeting with the state Department of Finance would be sought so those people can weigh-in.

However, Mindy Patterson, lead analyst with the Department of Finance, on Oct. 11 via email confirmed the $1.5 million is a roll correction – not debt, as the city would prefer it labeled.

Having $1.5 million be wiped off the books also means the agencies that benefit from this property tax won’t be getting their share. That includes South Lake Tahoe, El Dorado County, STPUD, LTCC and Happy Homestead Cemetery District.

It’s likely their share of funds from what was redevelopment won’t be seen for years based on all the debt the successor agency is now saddled with.

The one bright spot for the agencies is that at the Oct. 11 meeting on a 5-2 vote, with Cole and Kerry the dissenters, it was agreed the $1.4 million that had been set aside for the Aspens housing project will be returned to the successor agency coffers. And in turn it will be distributed to the government bodies listed above.