Update: City officials are saying it will be after midnight when people will be able to return home.

By Kathryn Reed and Susan Wood

A South Lake Tahoe man was taken to Barton Memorial Hospital after being burned while trying to put out a structure fire Tuesday night and two houses were completely destroyed.

The fire on April Drive in South Lake Tahoe started a little before 6pm Sept. 18. 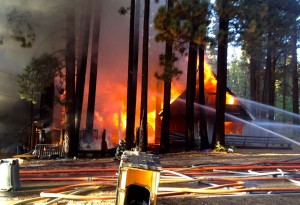 It did not take long for Peter Darvas' house to be fully engulfed in flames. Photo/Damian Frisby

Peter Darvas, who owns the larger of the two houses, is the person who was injured. He was being treated at Barton for burns to his face and shoulders. Officials told Lake Tahoe News he was trying to put the fire out and in the process was injured.

Fire officials said it is too early to know the cause of the fire and estimated damage.

Flames spewed from windows and the shake roof was disintegrating as firefighters attacked the flames from the ground and the ladder truck.

People in the area of Pioneer Trail were being evacuated.

“I heard explosion after explosion and I saw the (corner) house on fire and it caught the house next to it (on fire) in three seconds,” Karen Holmes, who lives on the street over, told Lake Tahoe News. “It’s the most incredible thing I’ve ever seen.”

Holmes, who grew up in South Tahoe, looked across the street and saw Hal Cole’s horses running around a bit frantic. Cole, who was not home at that the time of the fire, lives on the other side of Pioneer Trail from the fire.

While Darvas does have animals, it is not known if they are OK. No one was home at the residence next door on April.

Holmes echoed Fire Chief Brian Uhler’s sentiments that the town was lucky there was no wind. Uhler and area firefighters were at first concerned the fire would spread uphill into the forested area.

It is not known what the explosions were, however Darvas is a well-known artist so it could have been some of those supplies.

Darvas also is known for having a lot of debris in his spacious yard. The city has hauled some of his stuff away and the two sides have been dealing with abatement issues.

At the time of the call South Tahoe crews were gathered at the airport. More than 60 people and 15 pieces of fire equipment were on the scene. They included South Tahoe, Lake Valley, Tahoe Douglas, Fallen Leaf Lake, and U.S. Forest Service. El Dorado County sheriff’s deputies and California Highway Patrol also assisted.

Traffic was still being rerouted around the area and likely will be well into Tuesday night as fire crews keep attacking the flames. Liberty Utilities crews are also on scene because of downed utility lines.