It has been 10 years since the South Lake Tahoe parking garage at Heavenly Village opened. It’s been a financial boondoggle since Day 1. Today it is in technical default and the city is on course to default on the bond payments.

When the area near Stateline was redeveloped, the city of South Lake Tahoe opted to own the parking garage. Throughout the years it has lost various sums of money. Currently, it is operating at about an $80,000 a year loss. 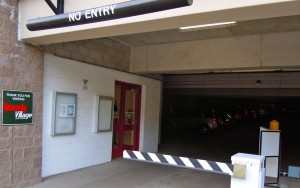 South Lake Tahoe is running out of money to pay the debt on the parking garage at Heavenly Village. Photo/LTN file

The technical default is because revenues are less than expenses. Bondholders are aware of this. But when the fund balance reaches zero or is a negative number, then the whole garage is in default. It’s possible this could occur in the next year if more money is not generated soon.

“Once all of the funds deposited with Bank of New York, Mellon have been depleted, a default on the bonds could occur if yearly parking garage revenue is less than yearly debt service (principal and interest),” Debbie McIntyre, South Lake Tahoe accounting manager, told Lake Tahoe News.

The exact consequences and steps that would be taken if the city defaults on the payments is not known.

The original bond from 2002 was $9 million. The soonest the bonds could be refinanced is December 2013, which might be too late, even if it were to help restructure the debt payments.

With California getting rid of redevelopment agencies, this has further complicated the matter in terms of who actually owns the garage.

“The land the garage is on was owned by the [redevelopment agency] and now the successor agency, but the buildings are owned by the [joint powers authority] established for the issuance of the bonds. But regardless, the bondholders have title to the revenue until the debt is paid off, so although regardless of deed, the ownership is the bondholders’,” City Manager Nancy Kerry explained.

“In the case of this property, it is best to leave the ownership with the successor agency and bondholders until the debt is paid.”

To try to prevent complete default, the city is looking at ways to generate more income. But when free unlimited parking is in one direction at the casinos and two-hour free parking is at the center in the other direction, it is hard to convince people paying money for parking is worthwhile.

South Lake Tahoe and Heavenly Mountain Resort last week came to an agreement for people who have season passes to the resort to get a deal on parking. While there was a program in place last year, it did not get implemented until the snow had fallen.

Annual passes — which have nothing to do with the ski resort —  are being lowered to $500.

City officials are also talking to PADMA to see if there are ways to get people to park at the garage and to have more of the Heavenly Village businesses be part of the validation program.