TAHOMA – As the first president of Wells Fargo Bank, Isaias Hellman was well versed in how to make money. He also understood real estate.

In 1897, the German-born financier bought 1,000 acres of waterfront property on the West Shore of Lake Tahoe that included two miles of beach. Then he bought another 1,000 acres on what is now the west side of Highway 89.

This was where he and his family, along with multitudes of friends, would pass away the summers. While Hellman had to spend most of his time taking care of business in San Francisco, others enjoyed the estate he had created. 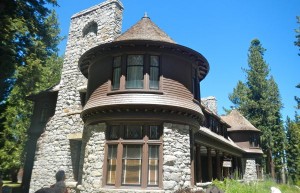 The Ehrman Mansion is a trip back in time before Lake Tahoe was truly settled. Photos/Kathryn Reed

In summer 1903, Pine Lodge was ready for guests. It took only two years for the beachfront house – which is more like a mansion – to be constructed. It cost $22,000 to build.

While much of the material came from the surrounding area, all the supplies and workers reached the property via boat. Granite came from Meeks Bay and the lumber from Hobart Mills, north of Truckee.

A spiral staircase, with windows looking west to the back yard and away from Lake Tahoe, goes to the second floor. This is where the family and their friends slept – in the eight bedrooms. It was unusual at that time for bedrooms to have their own bathrooms, but seven of these did.

On the third floor, which is not open to tourists except during rare occasions, were the four bedrooms for staff.

As children started to come to the estate, a separate building was built for them so they were not with the adults in the main house.

Even though roads were not yet built, the home had indoor plumbing with hot and cold water, as well as electricity. A steam generator provided the modern conveniences.

It also took 200 cords of wood – which was the primary heat source.

With a caretaker on-site year-round, he would dam General Creek so ice could be cut into blocks and stored in a shed all summer. They were for refrigeration.

It was Hellman’s daughter – Florence Hellman Ehrman – who spent the most time in Tahoe. She inherited the property from her father. Thus the reason is it most-often called the Ehrman Mansion.

By 1927, the mansion was on the power grid. A year later the state had paved roads on this side of the lake. In 1930, telephone service arrived in Tahoma. In 1945, a propane stove replaced the wood cooking apparatus.

Today it is a state park and museum of sorts. California State Parks in 1965 paid $7.2 million for the mansion and 2,000 acres. It sat vacant for 20 years. At first officials thought about tearing down Pine Lodge, as the house was called by the original owners, and turning the area into a campground. Instead, what became a campground is the acreage on the other side of the state highway.

The public was welcome in the 1980s. It is well worth taking a tour of this slice of Tahoe history, with its dining room that has woven redwood walls and ceilings one-twentieth of an inch thick. This room looks like it would have in the 1930s.

A mirror is low on the wall – all for the women to check to make sure their petticoats were not showing, let alone their ankles.

A rather modern kitchen produced about 150 meals a day; each guest was served three meals a day.

And if a trip back in time is not to your liking, the grounds are pleasant to stroll and the beach worth catching some rays on. The icehouse is open without a fee, as is the boathouse where the classic wooden Cherokee is stored.

From South Lake Tahoe, go north on Highway 89. Go for about 19 miles. Sign for the state park will be on the right. (The entrance is 10 miles from Tahoe City.)

• Sierra State Parks Foundation and California State Parks is putting on “behind the scenes” at Ehrman Mansion on Aug. 31 from 5-8pm. Tickets are $50/person, with proceeds designated for maintenance and repairs of the mansion.