With a glass of wine in hand and an incomparable view outside her Ski Run-area hilltop home, the woman who dedicated about half her life to Lake Tahoe history is sharing a bit of her own with a grateful community.

Betty Mitchell just turned 90 years old – but of course, one would never know it judging from her ongoing goals and the shape she’s in. (The big party is this week.) She stacks her wood and still finds time to visit and help out at the museum run by the Lake Tahoe Historical Society, a group this charter member and past president has committed at least four decades to in South Lake Tahoe.

To many – Betty Mitchell is the Historical Society. Even Del Laine, herself a longtime anchor of this community, calls Mitchell “the heart of that organization.” To think, she hated history as a child.

“Now they do a good job (of teaching it), but when I was a kid, they presented it badly. It was a bore,” Mitchell said. The UC Berkeley grad had no interest in memorizing war years. She wanted to know why events occurred.

Nonetheless, Mitchell’s blossoming interest in history came from her roots. Her father was a history buff, and like him, she would “shudder at the thought of losing everything,” meaning the archives and artifacts that define an area.

“Here we have the best trails, the best lakes and the best beaches. They could have done so much more. They’ve put the emphasis in the wrong places. This year, they’re finally putting the emphasis on recreation. I’m glad to see that.”         — Betty Mitchell 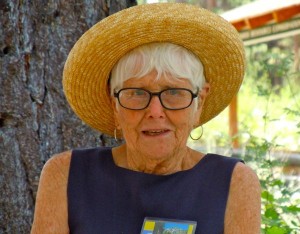 “And that’s what was happening here,” she said of South Lake Tahoe.

Her involvement in the Historical Society has kept her healthy, moving and active. After all, it’s difficult to think of a Cal alumni who majored in social services sitting and watching the world go by without participating.

Mitchell is modest, but not meek by any means.

In 1958, she and her late husband, Tom, moved to the Bijou area on Janet Avenue.

Back then, “Glenwood only went that far,” she recalled. The Mitchells discovered they had to arrange for their two children, Pat and Linda, to get to school because the bus would only put neighborhoods on the route that housed at least seven students. This one had six.

Learning was crucial to the schoolteachers of the household. After serving as a pilot in the Army, Tom spent a lifetime in the teaching profession. After a career in social services, mainly in the San Joaquin Valley, Betty became a substitute teacher when their children were in school. The Livingston High School sweethearts moved here because “Tahoe had the best salaries for Tom,” she said.

And of all the places to live, there was a prerequisite beyond money.

The Mitchells were accustomed to small towns with small schools. Betty represented one of five students who attended the two-room Yosemite (National Park) Grammar School, which still stands today.

“It still looks like it did when I was a kid,” she said.

The Mitchells seldom missed the every five-year reunion of their high school.

Eight years after moving to Tahoe, the couple had their Ski Run-area home built. It’s a homey house that has Betty’s character written all over it. The Declaration of Independence hangs on one wall. Antique bottles line the top of the kitchen cabinets. Tom’s Merced ranch homestead deed signed by President Andrew Johnson adorns another wall.

Despite the important hangings, the Mitchell home is dominated by windows. “You’d never be allowed to put this many windows in this house today,” she said, referring to TRPA rules.

The views are as rich with history and memories as the house.

One whole wall provides a panoramic mountain view, with Pyramid Peak dominating the landscape. During the Angora Fire five years ago, she watched in horror as the blaze crested the ridge and teased the Fallen Leaf Lake community.

“I saw that and wondered about Barbara (Craven),” Mitchell said of her friend, another longtime South Shore matriarch.

Five years before that, Mitchell was tested when the Gondola Fire raged up the ridge and threatened residents in the Saddle Road-Needle Peak area before the wind shifted and the blaze headed east.

The view of Lake Tahoe takes up another wall. And on the other side, she looks out at Heavenly Mountain Resort’s Gunbarrel chairlift and Olympic run. In the winter, the twosome watched the ski activity – sometimes through binoculars for greater detail.

He’d announce when ski patrol were “bringing another body down,” Mitchell says of her husband.

But in 1960, it was Squaw Valley that provided one of the most memorable times in Tahoe during Mitchell’s 54 years here. The South Shore was also involved – mostly with building a bed base for the huge world-renowned endeavor. Beforehand, she and Tom worked as timers for pre-Olympic races.

Civic involvement was the mantra of the Mitchells.

Betty has been a member of Soroptimist International South Lake Tahoe since 1969 and once served as president. She was also on the first Sierra Nevada Region Public Affairs Committee.

Her involvement in women’s issues became the guiding principle on what she chose to volunteer for. She led the Soroptimist club’s El Dorado County Commission on the Status of Women and was a founding member of the South Lake Tahoe Women’s Center (now called Live Violence Free). She even became the executive director for one year. She also was a member of the Lake Tahoe Children’s Theatre throughout the 1960s.

Together, the Mitchells were among three couples who spearheaded the drive for the city of South Lake Tahoe to incorporate, because as Betty saw it: “There were no rules, and we needed some.”

The incorporation was spawned out of a desire for city services such as snow removal and public safety.

“She’s one of the tireless people who joined an effort or cause and works at it, works at it and works at it,” said Laurel Ames, another Tahoe pioneer who organized the city effort. She’s known Betty for about 50 years and characterizes her as “warm, engaging and outgoing.”

“You know that if you call her up and ask a question, she’ll have the answer,” Ames told Lake Tahoe News. Ames considers Betty as the “glue” of the community.

Late after the city incorporated, Tom served on the city Planning Commission. The panel witnessed a lot of action when it came to the early stages of the sign ordinance. To this day, the controversial rule dictates what type of and how many signs may be placed on city streets. Betty remembered the politics ran rampant – especially on an issue plagued with perceived favoritism. Tom didn’t budge at not giving exceptions for the biggest businesses in town. The San Francisco Chronicle ran the story when most reporting agencies were afraid to.

“It was really kind of typical. In small town USA, you decide if you want to live some place, and the reasons you do, and you know you have to put up with stuff,” she said. “I feel connected to Tahoe. The things I like about it are still here. I don’t want to live anywhere else.”

Regardless of her love for Tahoe, there was a time Betty was pushed over the edge.

When Sunset magazine published a spread about a dozen years ago about Tahoe, it featured the recreation and beauty of the North Shore while the South Shore was shown as a haven for gambling. She grabbed the magazine known as the bible of Western culture, drove to the South Lake Tahoe Chamber of Commerce office and left it on Executive Director Duane Wallace’s desk. He wasn’t there.

“I was so mad. I wished he had been there. Here we have the best trails, the best lakes and the best beaches. They could have done so much more,” Mitchell said of the Sunset magazine spread. “They’ve put the emphasis in the wrong places. This year, they’re finally putting the emphasis on recreation. I’m glad to see that.”

Her own favorite hike is above Red Lake to Winnemucca Lake, a hotbed for wildflowers and one place where Betty dropped some of her husband’s ashes after he died of cancer in 1994.

Despite her time with her children, three grandchildren and two great-grandchildren and her cat Buster plus her involvement with the California Widowed Persons Association, Betty admitted: “You never stop missing.”

Memories abound of her adventures with Tom. She recalled joining others to do her preferred hike in a one-way shuttle with one vehicle parked at Woods Lake and another at the Carson Pass trailhead.

And it was Betty’s vehicle Laine could remember most as the lighter side of this Tahoe mover and shaker’s life – “a larger-than-life utility vehicle” upon which a passing motorist would need to strain to see her behind the wheel.

“We all knew it was Betty on the way – short of height but never short of stature,” Laine told Lake Tahoe News. “Betty has been a strong force in the bedrock of the South Shore community and remains so today with her dedication to the history of our region.”