FALLEN LEAF LAKE – Who can vote at Fallen Leaf Lake continues to be a murky issue, but clarity was brought to the boat inspection process.

The board of this community services district met Saturday at this lake that sits on the edge of Desolation Wilderness.

What was learned just this month is that the board missed the deadline to be able to appoint two members to fill out the five-member board. Now it is up to El Dorado County to either appoint two people or call for an election. If the latter were to occur, the vote could be on the November ballot. 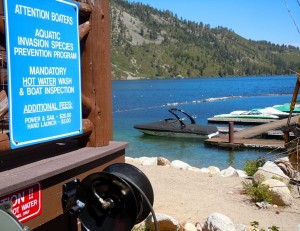 Full decontamination of boats is not offered at Fallen Leaf Lake. Photo/Kathryn Reed

Two people applied for the board – Joan Cathcart and Larry Calof. The board has recommended to the county that these two be appointed.

Mike Cathcart, who is an attorney but was not offering legal advice to anyone at the meeting or to the board, said the main issue with who can vote in the district centers on a local U.S. Forest Service interpretation. Whoever is named as the primary permitee of a USFS parcel is not allowed to vote.

Cathcart said that issue still needs to be resolved, adding that he has calls into Forest Service officials outside the basin.

“We need to make everyone who wants to vote to feel comfortable to do so without the threat of losing their permit,” Cathcart said.

As for the definition of domicile, Cathcart said the district attorney “recognizes that second homes can be domiciles.”

The voting issue has caused much consternation among those who have homes at Fallen Leaf Lake. The differing sides came together last year trying to get Assemblywoman Beth Gaines, R-Roseville, to carry legislation that would determine who had the right to vote. It never came to a vote. And Gaines, after the November election, because of redistricting won’t be the rep in the Assembly for this area even if she wins.

Who can vote also determines who can be on the board. A board members needs to be a registered voter in the Fallen Leaf Lake Community Services District.

While there has been talk of dismantling the CSD and creating a homeowners association, this is easier said than done. Legal settlements from 20 to 30 years ago play a role in what can take place.

But the board is moving forward with the job at hand — to oversee the marina, store and fire department.

Fallen Leaf Lake will continue to use its apparatus near the boat launch to clean the exterior of all boats. Being able to pump 1 gallon of 140-degree water a minute is sufficient to wash away any potential invasives that are on the watercraft.

However, being able to pump 5 gallons of 140-degree water in a minute is what’s needed to cleanse a motor of any quagga mussels that may have become attached to the vessel.

Because the marina does not have that capability any boat that cannot prove it was last launched at Fallen Leaf or Lake Tahoe will have to be inspected in Meyers – the nearest decontamination station. About 10 boats last season had to make the trip back to Meyers.

Fallen Leaf Lake has zero aquatic invasive species, unlike Lake Tahoe that has Asian clams, milfoil and other undesirables.

• Jeanne Lear with South Tahoe Refuse explained how residents can use the blue bag recycling program.

• The preliminary budget for 2012-13 was talked about. Fire Chief Gary Gerren talked about how this fire season is likely to be bad, with conditions much like 2007, so he has requested more funds for more staffing and training. The final budget will need funding for the election if one were to occur.

• The swim platform should be in the water in the next two to three weeks.

• The concessionaire has brought in more than $50,000, with the marina and store open for less than a month. That is $50,000 more than this time last year.