While no decisions have been made as to what the trail system at Fallen Leaf Lake will look like in the future, four additional alternatives have been added to the mix to reflect what the public desires.

Nearly 40 people attended a workshop Wednesday night at the U.S. Forest Service office in South Lake Tahoe to learn about the changes that have been made since the discussions started earlier this year as well as to offer more input. The original preferred alternative – No. 2 – remains on the table. Alternatives 3-6 incorporate the more than 150 responses the feds received. Alternative 1 would be to keep the status quo. 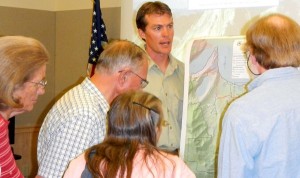 When the final document comes out in the first quarter of 2013 it’s possible a combo of the alternatives could be selected instead of one as it is written in draft form.

The goal is to address this section of the South Shore that is on the north side of Camp Richardson and captures the entire Fallen Leaf Lake area trail system. Trails, parking and public access are all part of what is being studied.

One person at the Sept. 19 meeting asked if all the improvements would mean more people re-creating in this area.

Jacob Quinn, who led the bulk of the meeting for the Forest Service, said with the increase in use in this area in the last 10 years it has meant overuse of some trails and that people tend to create their own trails when the ones they’ve been on become overcrowded. The idea is even if more people come, the trail system will be better to disperse the various users.

The goal is to decommission most of the user-created trails, while improving others. At the same, trails in the backcountry will remain designed for less use, while trails closer to population bases will be able to handle more people.

Parking is an issue, as was expressed regarding the Glen-Alpine area at the far end of Fallen Leaf Lake. But Quinn pointed out it’s a fine balance between providing enough parking spaces and not wanting to draw the masses to an area than can’t sustain that many people if they were to all arrive.

All of the new alternatives have the bridge at the dam at Fallen Leaf Lake being 4- to 6-feet wide. Originally the Forest Service wanted to widen it up to 14 feet.

Another thing the new alternative has in common is retaining the trail along the west side of Taylor Creek that runs north and south. The Clark and Church trails would also stay.

Accessing public lands during the winter and at other times was discussed at the Sept. 19 meeting. Liana Zambresky asked why parking lots need gates.

Garrett Villanueva, trails guru with the Forest Service, said part of the reason is because concessionaires run some Forest Service land and when they are not on site there is no one to monitor activity going on. He said his agency doesn’t have the staff to manage sites in the off-season.

However, he said solutions are being worked on to provide more access. But snow removal and year-round access are not being considered.

Bill Connolly brought up the issue of the gate at the entrance to Valhalla/Tahoe Tallac Site being closed so often which creates an access issue for the handicapped because this is one of the easiest places for the disabled to access Lake Tahoe.

Brenda Knox with the Tallac Association told the group it’s a tricky balance between accommodating the public and needing the spaces for events – whether it’s a show or a wedding. But she added that the gate issue is something her colleagues are working on.

More information about the project is online. The Forest Service will accept comments through Oct. 12.

Previous post : Donner Lake trees to remain for now Next_post : Opinion: Stracener’s lies should keep him off the bench