MEYERS – With markers in hand, a room full of people started drawing and writing descriptions on maps about what Meyers should evolve into. And much like the discussions being had around the basin, recreation, connectivity and a sense of place evolved as dominant themes.

Moving the boat inspection from where it is on Highway 89 to someplace where it’s easier for motorists was an idea. But a bigger idea was to incorporate a visitors center into the boat wash area since this is a captive audience. Plus, the Meyers station is the busiest one in the Lake Tahoe Basin.

Having distinct cross country ski routes through Lake Valley Recreation Area and Washoe Meadow State Park, as well as putting in bridges across the Upper Truckee River and Angora Creek that have nothing to do with golfing were some of the ideas. 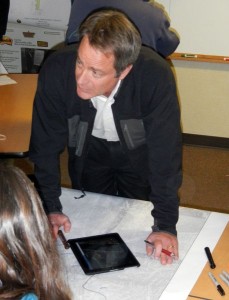 Steve Bannar talks about trails he would like developed in Meyers. Photo/Kathryn Reed

Changing land use designations to accommodate the possible relocation of Lake Tahoe Wildlife Care is on the table.

These ideas and more were discussed at a three-hour meeting Nov. 7 at the Lake Valley firehouse in Meyers. The goal is to come up with an updated plan for Meyers – the last one is 20 years old – and have it ready to be presented to the Tahoe Regional Planning Agency early next year.

When someone brought up how Winter Park, Colo., has a commercial area about as long as Meyers’ on a state highway and functions better, Hitchcock said, “The problem is the Department of Transportation in Colorado is more progressive than Caltrans.”

The highway is so wide in this section of the South Shore because it was going to be a freeway at one time.

El Dorado County Supervisor Norma Santiago would like to see the county take over the right-of-way from Caltrans. This would likely allow businesses to be able to do more with their properties and could take some snow removal responsibilities out of the state’s hands.

She also suggested flopping the lanes for the bug station so locals go right through without veering to the right, and those needing to be inspected are off to the side of the road.

Santiago wants a new building that is not an “eye-sore” and meets legal requirements.

Transportation was one of the main topics of the night. Creating park and ride areas to access recreation, plus having plowed winter recreation parking were brought up.

The fact Meyers does not have bus service other than on-demand was noted.

Being able to have connections to places that don’t involve being on or alongside a highway were mentioned, though so was creating a bike path along Highway 89.

Linking Tahoe Paradise Park and the state park was broached.

The Western Juniper Tree is on the cover of the 1993 Meyers plan because this is the only enclave in the basin where this species is found. People advocated for highlighting this fact in a more public manner.

Yanks Station in the prior plan was touted as where retail would go. It doesn’t exist anymore. In its place is the California Conservation Corps building. So that aspect of the old plan will definitely be revised.

The old plan also called for median landscaping on the highway with five distinct districts, with retail being two of them at opposite ends.

“What is missing from the old plan is mixing uses,” Hitchcock said. This would require not having as many districts.

He also suggested the possibility of having all of Meyers designated an area where special events can take place so it is less limiting than current policy.