Hiking to Angora Lakes is one of those mixed blessings this time of year. It’s the same feeling one can have on Fallen Leaf Lake Road.

The route to get to either lake is crowded with vehicles on what is really a one-lane road, but the end result is a majestic alpine wonder.

Last Sunday four people and two dogs made the 6-mile roundtrip trek to Angora Lakes. It’s one of those climbs I never get tired of no matter the season. 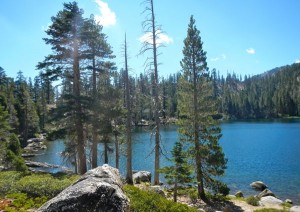 Lower Angora Lake is much quieter than the upper lake. Photos/Kathryn Reed

Plus, Angora Road is multipurpose – good for walking, biking, snowshoeing and cross country skiing. And in the fall, the aspens at the start of the route are stunning. And in winter it feels so much more like being in the wilderness, even somewhat desolate.

It got its name from the angora goats that used to graze in the area.

While we called it a hike, it’s hard to do so when the bulk of the walk is on pavement. It had been some time since any of us had been there. And for all I know, it was AJ’s first trek there.

It’s not the best excursion for dogs because they are not allowed to swim in the upper lake where all the people are – which is the easiest point to reach the water. However, there were no signs at the lower lake saying dogs were not permitted. So, AJ and Buddy were able to get a little swim in and some water there.

But there is no other water along this trail for dogs to cool off in.

Still, what makes this a good people destination are the views and the ability to walk side-by-side. The latter is good for catching up with friends.

After a fairly steady ascent, the road flattens out on Angora Ridge. To the left is the Angora burn area. Tons of underbrush gives the hillside a look of rejuvenation, though the blackened and even ash white remnants of the dead trees from the 2007 fire dominate the landscape.

To the right, though, is the more serene Fallen Leaf Lake, where those who are willing to brave the chilly waters are skiing. And beyond it is Lake Tahoe.

From the resort’s parking lot the trail really is a dirt trail for about one-half mile. This allows the experience to be called a hike.

Food may be purchased in the little store, and paddleboards and kayaks may be rented.

For those who want to spend more than a day or afternoon at Angora Lakes, there are nine cabins that are for rent on a weekly basis. The Hildinger family has been operating the seasonal resort on U.S. Forest Service land since 1917.

From South Lake Tahoe, at the Y go on Lake Tahoe Boulevard toward South Tahoe High School or the burn area. Turn right on Tahoe Mountain Road. Go right at the T intersection. Go left at the next T. The road curves a bit. Go slow. Now until early October the U.S. Forest Service gate on the left is open. Park nearby to get the full “hike”. Drive up the road for a half-mile hike from the parking lot to the resort.

• In the winter, don’t park on that road during snow removal.

• It costs $7 to park during the season at the resort.

• While people cliff dive, note that submerged rocks are not marked and people have lost their life.