Fallen Leaf Lake is clean. That is, it is still free of aquatic invasive species.

Aquatic invasive species, including Eurasian watermilfoil and Asian clams, have already been identified in Lake Tahoe and Donner Lake. Spooner, Martis, Bucks and Lilly Lake have also fallen victim to the watermilfoil. But other area lakes including Echo, Boca, Stampede, Prosser and Fallen Leaf have all managed to keep their free and clean status. 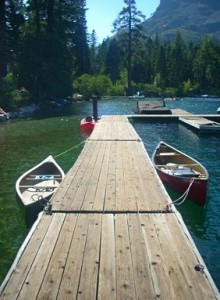 Some people would like it mandatory for non-motorized watercraft to be inspected before entering Fallen Leaf Lake. Photos/Jessie Marchesseau

Once infected, these species are nearly impossible to eradicate and are costly to control. The communities surrounding Lake Mead spend more than $20 million a year in an effort to control one of the worst AIS infestations in the U.S. These invasive creatures can affect water clarity, native plant and animal life, clog water intake pipes and, if the infestation is bad enough, even affect water potability.

In 2011, the roving non-motorized watercraft inspector at Fallen Leaf Lake logged 428 inspections. Of those, 18 were not clean, drained and dry (the most effective method for preventing transport of AIS). However, more than half came from infested waters or waters whose AIS status was unknown. Each one of these watercraft poses a threat to the waters of Fallen Leaf Lake. For this reason, members of the FLPA do not believe the current system of prevention is good enough.

Under the present plan, boat inspections are mandatory for motorized boats entering Lake Tahoe, Echo Lake and Fallen Leaf. Fallen Leaf also has a mandatory boat wash at its marina where every watercraft, motorized or not, is thoroughly washed with hot water by trained personnel.

“Everyone is real cooperative,” Jerry Giese, weekend harbor master at the Fallen Leaf Lake Marina, told Lake Tahoe News. “Nobody wants to be the one to put something in the lake.”

In addition to the boat wash at the south end of the lake, USFS personnel screen everyone entering the campground at the north end of the lake with any type of watercraft. They ask how long it’s been since it was in the water, how long it has been dry and what water it has been in within the last month. The personnel write all this down, along with the license plate of the vehicle and check their list of infected waters. If the boat came from infected water, they call the AIS hotline set up by Tahoe Resource Conservation District and send the guest to the boat inspection station in Meyers.

The TRCD and Fallen Leaf Lake Community Services District also share the cost of a full-time roving non-motorized watercraft inspector. She roams the campground, boat launches, and other areas inspecting watercraft and educating paddlers about AIS and the measures necessary to prevent infestation.

The FLPA has been pushing for years to install a second boat wash at the north end of the lake specifically for non-motorized watercraft. It is already mandatory for all motorized boats to be washed; they want to extend that mandate to non-motorized.

The U.S. Forest Service, which owns the campground, and other members of the non-motorized watercraft working group have been reluctant to approve the group’s proposal and have denied it a number of times, including this spring.

“No one in the working group was dead set against the idea or thought it was a bad idea,” said Ted Thayer, aquatic invasive species program manager for the Tahoe Regional Planning Agency.

However, Thayer and other members of the working group stated that as a whole they believe adding the additional wash would not be the most effective use of limited public funds. They decided sticking with the current plan of education and outreach is a more effective strategy.

Mike Kraft said the community members had originally offered to foot the bill for the wash as well as provide personnel to run it when they first proposed the idea years ago. The money has since been put to other uses. But some members of the working group thought it might be just what they need to get their plan passed at this point. 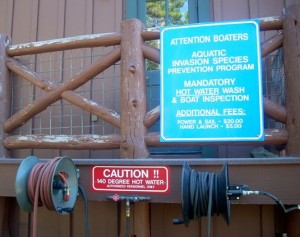 Fallen Leaf Lake's boat wash is at the marina.

“It would be a great reason to revisit it, if the Protection District could provide funds, so there would be no burden to the group,” said Patrick Stone, invasive species control project manager at the TRPA.

For now, paddlers will have to clean, drain and dry their own boats before heading to Fallen Leaf or drive to the south end of the lake where marina personnel are more than happy to do it for free.

To learn more about preventing the spread of AIS and become a registered self-inspector, go online.